New York City hot dog royalty returns to its origins this summer with word that the recently revived Feltman's brand will return to Coney Island. Feltman's will reopen on the site of its former glory at Surf Avenue and West 10th, as well as a kiosk inside Luna Park, according to The Coney Island Blog. Michael Quinn, owner of Feltman's of Coney Island, LLC, confirms the news.

Feltman's originally operated on Coney Island beginning in 1867, when German immigrant Charles Feltman began a pushcart operation that sold food to sunbathers on the beach. Feltman ultimately created the world's largest restaurant complex at the time, with 4,000 gas lamps, 12 restaurants, 2 bars, and the most famous carousel in America. (He also famously employed a young Nathan Handwerker, who went on to start rival business Nathan's just a few blocks away). 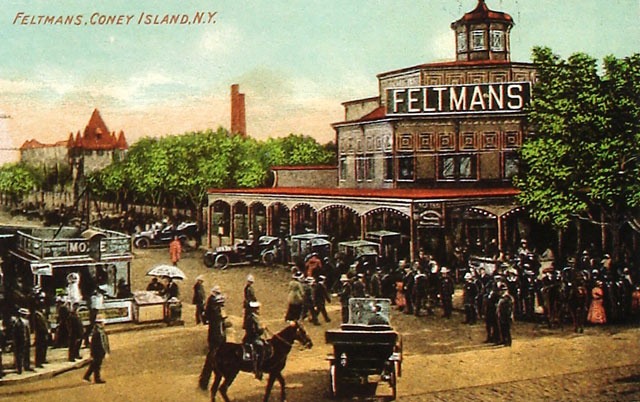 The Feltman's era on Coney Island ended in 1954—you can listen to an interview with Feltman's great-grandson here—but Quinn resurrected the brand through pop-ups and eventually opened an East Village location serving up the famous franks that are some of the city's best.

"The hot dogs will be prepared the same way as East Village," Quinn tells us of his plans for Coney Island. "We're going to replicate the same items including the popular Al Capone Hot Dog. Michael's of Brooklyn restaurant will be providing the vodka sauce in Coney Island as they do for our East Village location." There will also be non-hot dog items on the menu, including chicken and french fries.

#coney island
#feltman's
#hot dogs
Do you know the scoop? Comment below or Send us a Tip