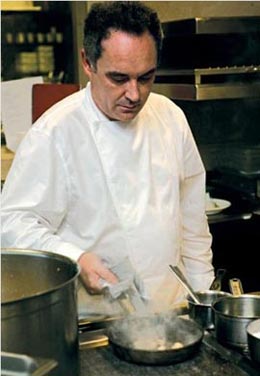 “We normally associate cooking with exposing protein to flame,” said Anthony Bourdain at the Times Center, introducing chef Ferran Adrià of elBulli, who rarely cooks proteins by exposing them to flame, and even more rarely appears at food festivals like the one that took place in the meatpacking district this past weekend.

Adrià is considered the forefather of molecular cooking, a maligned term that comes with manifestoes and conjures images of test tubes and lab coats. On Saturday Adrià said he regretted those kinds of associations, while panel participant Bourdain posited that Adrià’s seemingly experimental food has a solid basis in traditional Catalonian cuisine. The chef covered his eyes with his hands and leaned forward in his chair while questions were being translated for him. “The Bulli has become a monster,” he said, shrugging, “and it’s impossible to tame. Each season, everything is completely changed.”

He suggested that the new, colossal, photo-heavy book A Day at elBulli might act as a kind of guide to the creative work that goes on there. Adrià also suggested it might act as a proxy for those who can’t get a reservation at the restaurant.

On elBulli’s pioneering style of food: “The Bulli we see today, its philosophy was created between 1994 and 1997. There was a huge amount of humor in it. It was the only way I could establish some kind of acceptance with my diners, because it was such a new, different language. I needed to establish some kind of connection, so we made things with a huge amount of humor.”

On the post-Adrià world of copycat, chemlab-wielding chefs: “There are so many new young chefs who are taking different aspects of this kind of food. You might ask about people who are copying and not doing so well, but there are also people who make really bad pizzas.”

On how new, strange things in the food world aren’t so strange after a few years: “In 1988, how many high-end restaurants in Europe were using pure olive oil? We would be surprised; there were very few.”

Bourdain, who last month iterated his general dislike for experimental food, admitted he was skeptical before he hosted the 2006 documentary Decoding Ferran Adrià, “I came to elBulli with a hostile attitude.” On Saturday, Bourdain said dinner at elBulli was “not just one of the most remarkable meals on the planet. It might be the most important meal on the planet.” At another point during the talk, Bourdain recalled his postprandial glow: “It’s like Eric Clapton seeing Jimi Hendrix perform for the first time. You come out of that room, thinking ‘What do I do now?’”

Eric Asimov, the Times writer, who was also participating in the panel, had the answer. “You go and hide for two years,” he said.

#anthony bourdain
#elBulli
#eric asimov
#ferran adria
#molecular gastronomy
#wine and food festival
Do you know the scoop? Comment below or Send us a Tip