City Councilman Rafael Espinal will introduce a bill today that would ban disposable plastic straws in all venues across New York, from stadiums to street vendors. Several American cities have already banned plastic straws, including Malibu, Seattle, and Miami Beach, and the idea has gained popularity internationally. Vancouver has voted to ban plastic straws, while Scotland and Taiwan are moving to ban them. If New York passes the law, it could be the largest city in the world to ban plastic straws.

Plastic straws are seldom recycled, and coffee shops and bars go through way too many straws every day. “One venue in Brooklyn reported using 1.5 million straws throughout the year,” Espinal said.

Straws are one of the top ten sources of beach litter, according to John Calvelli, Executive Vice President for Public Affairs at the Wildlife Conservation Society. The WCS is supporting Espinal’s bill, and has created their own campaign Give A Sip, to highlight the environmental damage of disposable straws.

“The sad thing is that probably by 2050 there will be more plastic, by weight, in the ocean, than fish," Calvelli said. Over 130 businesses in NYC have voluntarily committed to either stop using single use straws, or only serve them upon request, as part of the campaign.

Even straws bound for landfills can wind up in the sea, blown on the wind with other detritus like plastic bags. The Give a Sip campaign reports that 71 percent of seabirds and 30 percent of sea turtles have been found with plastic in their stomachs—in April a dead whale washed ashore in Spain with over than 60 pounds of garbage, including copious plastic, in its body. Public awareness about disposable straws' impact on the ecosystem also increased after this video of a sea turtle with a straw stuck in its nose went viral.

"I've become more concerned about single use plastic, when we have a federal government rolling back any environmental progress that we’ve made in the last eight years," Espinal said. "It’s important that our cities take the lead. All plastic, whether it be a bag or a straw, is having a detrimental impact on our environment. It's easy to drink your iced coffee or cocktail at night without a piece of plastic in it."

A City Council attempt to impose a five cent disposable plastic bag surcharge in NYC was essentially killed by Governor Andrew Cuomo in 2017. In April of this year, Cuomo proposed a statewide plastic bag ban that some environmentalists deem highly flawed.

It's unclear how much support Espinal's bill will have in the City Council, but he's optimistic it will fare better than attempts to ban single use plastic bags. "I think consumers will see that plastic bags are a necessity, but a plastic straw is not a necessity," Espinal told Gothamist.

Curious about the straw-free lifestyle, last week we asked readers about their straw habits. New Yorker Sarah Gentile told us she's been ahead of the curve for some time now, writing, “For years, I have been known as 'No Straw' for my standard bar order: G&T with no straw.” Canadian transplant Ashley Ball cleans and reuses plastic straws, and has to pre-emptively ask coffee shops not to stick a straw in her iced coffee order. “It’s always awkward, it’s never not awkward."

Meg Toth, who brings her own metal straws wherever she goes, has also had to face confused looks when she asks for no straws at coffee shops, restaurants, and bars. When she orders a drink with no straw, she still sees bartenders reach for a straw out of muscle memory. “Sometimes I catch them,” she says. “They’ll put the straw in my drink, see my face, and then take it out. I had one guy take a straw out and throw it on the floor.” 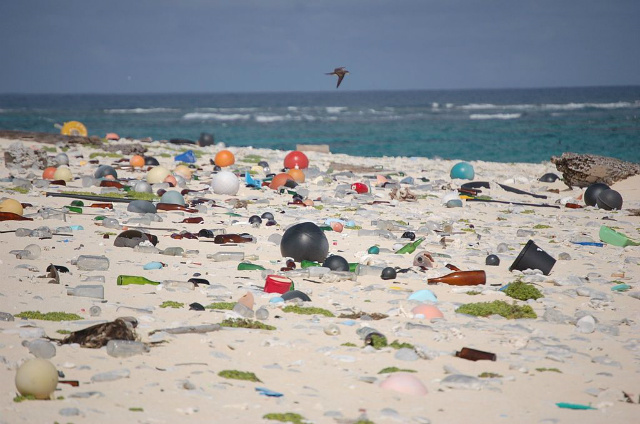 Drinking from a straw at a bar is an activity that goes beyond environmentalism. Some men seem to worry about the Freudian implications of being seen drinking from a straw. An Esquire guide on cocktail etiquette advises “Never drink through a straw, unless it's a piña colada. But then again, gentlemen don't really order piña coladas.” (Hm.) On the Ask Men subreddit, one thread reads “After ordering a drink, do you take the straw out?” One response, likely from someone smoking a Marlboro while riding a horse bareback through the set of a Sergio Leone film, responded “Men's drinks don't come with straws.”

This neurosis goes way beyond bars. A Wall Street Journal article about men performing the bizarre ritual of shopping for their own groceries quotes market researcher Lu Ann Williams, who says "A beer or soda in a long-necked, brown bottle makes a man feel like a man. Drinking out of a straw does not—puckered lips and sunken cheeks are not a good guy look."

For women, it’s a different story. Straws gained popularity in the early 20th century, first at soda fountains and then through the popularity of bottled Coca-Cola. In the 1940s, advice columnists were advising women that it was bad manners (and bad hygiene) to drink directly from the bottle, and that it was much more appealing, and attractive, to drink from a straw.

As reusable straws become more common in major cities, they'll likely take on a new set of cultural implications, following in the footsteps of the reusable grocery bag. And straws are only the first step toward a less disposable future—Espinal said he's been plastic lid free for over a year. His legislation, however, is limited to plastic straws, and allows for certain exceptions for persons with disabilities. Paper straws would also still be permitted.

Asked if Espinal's bill has City Hall support, a spokesman for Mayor Bill de Blasio's office pointed to his battle against plastic bags. "The mayor is focused on banning single-use plastic bags to reduce plastic waste to help protect the environment and benefit New Yorkers," said spokesman Seth Stein. "We will review this legislation as it moves through the legislative process."

Update 5/30/18: An earlier version of this article cited a statistic from the recycling company Eco-Cycle that Americans dispose of 500 million straws a year, but this estimate appears to be dubious.

#iced coffee
#plastic
#straw ban
#straws
#original
Do you know the scoop? Comment below or Send us a Tip