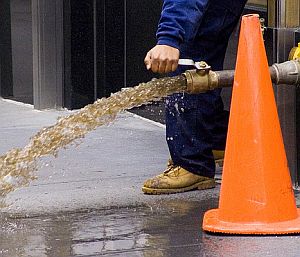 But the city needs to do a better job of securing land around the Croton watershed in Westchester, where development has increased non-point pollution. To compensate, the city is building a $2.8 billion filtration plant in the Bronx to filter water from the Croton system, which supplies about 10% of our total. And the city scored a gentleman’s C+ when it comes to reducing non-point pollution in the Catskill/Delaware Watershed areas east of the Hudson.

The favorable grades are non-governmental but still good news for the city, because if evidence shows that the water supply is falling behind, the EPA will force New York to install a filtration plant that will cost billions to build and hundreds of millions a year to maintain. So pour yourself a celebratory glass of aqua, blast some Fela Kuti, and pore over the entire 75 page pdf on the Riverkeeper website.

#card
#catskill
#Delaware
#drinking
#grades
#nyc
#report
#riverkeeper
#tap
#water
#watershed
Do you know the scoop? Comment below or Send us a Tip