A new class action lawsuit is alleging a widespread contamination of Starbucks locations across New York City, after the coffee chain allegedly exposed customers to an industrial pesticide known as Dichlorvos in an effort to hide unsanitary conditions.

Commonly known as DDVP, the pesticide is a neurotoxic agent intended for industrial agriculture, and poses a threat to humans even in short term durations. While the EPA has previously proposed banning the product for home uses, it remains available to consumers in the form of test strips, often used to fumigate bed bugs. Environmental groups consider it "one of the nastiest pesticides still on the market," and the Center for Disease Control has explicitly warned against its use in enclosed spaces, particularly in proximity to food. Exposure to the chemical has been known to cause convulsions, muscle tremors, nausea, anxiety, diarrhea, paralysis, and in some cases death.

Despite the repeated warnings from their own employees and exterminators about the known health risks, Starbucks has continued to spray harmful levels of odorless DDVP vapor in many of their locations, according to the lawsuit. Photos taken at several locations in Manhattan show the "No-Pest Strips"—the labels of which caution against indoor use—inches away from exposed bagels, next to food preparation equipment, and piled up on air vents.

The suit also alleges—in stomach-churning visual detail—that Starbucks turned to the pesticide strips to combat "disgusting conditions" at some stores, which allowed flies, cockroaches, maggots, silverfish and other pests to multiply just out of sight of customers. The following photographs were taken by Paul D'Auria, a former Pest Control Technician who serviced Starbucks' locations in Manhattan:

"Dangerous mold and growths inimical to the safety of human beings," per the suit (Courtesy of Wigdor Law Firm)

"New Yorkers deserve to know what they are putting in their bodies and we call upon Starbucks to explain, as we allege in the complaint, its failure to take appropriate care for its customers' well-being," Douglas H. Wigdor, who filed the complaint in New York State Supreme Court on Tuesday, said in a statement.

The attorney also called on the company to explain why Starbucks management allegedly ignored written and verbal instructions from staff members and exterminators (including D'Auria) to stop using the pesticide.

A spokesperson for Starbucks, Katie Rodihan, told Gothamist that Starbucks had "directed local leadership to remove theses devices from all stores" immediately after learning that the pest strips were being "misused." She added that an independent expert had been consulted, and subsequently "confirmed the pest strips did not put anyone at a health risk."

Rodihan refused to disclose the name of the outside expert, and whether they had visited stores in New York City. She also declined to say when Starbucks became aware of the issue and at what point the strips were removed. 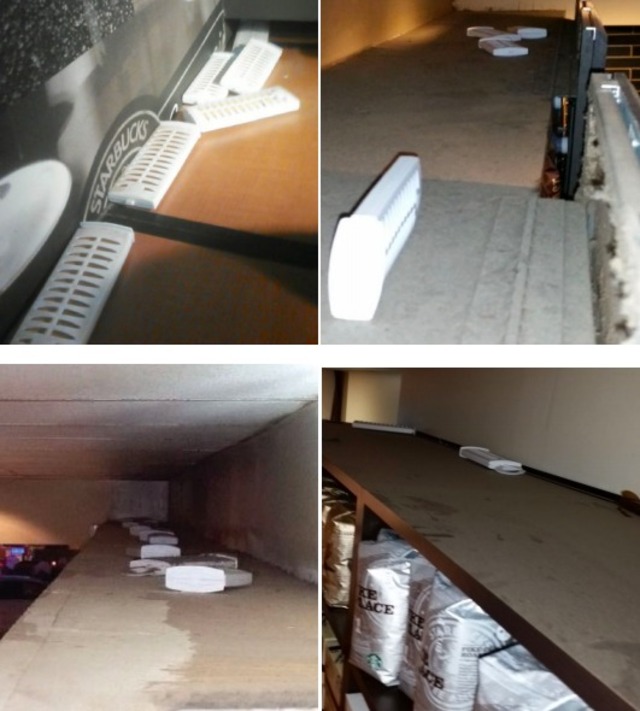 According to the suit, two exterminators provided written warnings to Starbucks management about the toxic pesticide on sixteen occasions over a two year period beginning in 2016. The complaint alleges that the company's Regional Quality Assurance Manager admitted in October 2017 that "Starbucks personnel had failed to internalize 'the importance of breaking this habit' and instead continued to misuse DDVP in Manhattan-area stores with impunity."

Last month, the Starbucks located on North 7th Street in Williamsburg was shuttered by the city health department, which found a slew of violations including the presence of vermin in the facility's food areas. The location was also docked during an April 30th inspection for surfaces that were "not properly washed, rinsed and sanitized after each use and following any activity when contamination may have occurred."

The company's spokesperson said the pesticide issue was unrelated to any contamination at the Williamsburg Starbucks. lt's unclear whether the location will reopen.

#ddvp
#maggots
#pesticide
#starbucks
Do you know the scoop? Comment below or Send us a Tip
A new Gothamist is coming! We’ve moved comments over to our beta site. Click here to join the conversation and get a preview of our new website.