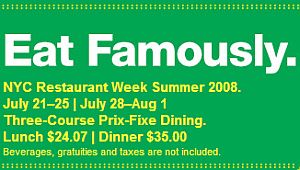 Here we go again with another Restaurant Week, which actually occurs over two weeks (minus weekends): July 21st through the 25th and July 28th through August 1st. Over 200 restaurants around Manhattan – many of them fancy places like Bar Boulud and Anthos – will be offering prix-fixe lunch specials for $24.07 and prix-fixe dinners for $35.00.

Food snobs will tell you you’re a chump for signing up for this because chefs just dump their cheap ingredients on supposedly less-refined palates, and sometimes the prix-fixe isn't even much cheaper than their usual price (21 Club’s standard prix-fixe is only $5 more). Also, once the staff finds out you’re there for Restaurant Week you might as well be invisible, for they sometimes wrongly assume you’re a cheap bastard.

But we can personally vouch for very positive Restaurant Week experiences at Crema and Indochine during the last Restaurant Week (though the hotties who work at the latter can make it hard to focus on things, like chewing and swallowing.) The only thing to do is to pick a well-reviewed restaurant that’s way more expensive than you’d usually pay for and throw caution to the wind. Worst case scenario is you pay what you expected – plus the drinks and whatever loose change you can scrounge up for a tip. Reservations will be taken starting tomorrow; details here.

#expensive
#manhattan
#nyc
#prix fixe
#reservations
#restaurant week
Do you know the scoop? Comment below or Send us a Tip