NYC Pizza Rules, But Does Anyone Really Know Why? 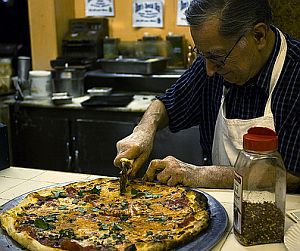 A Wired reporter bemoaning the pizza backwater that is San Francisco rang up Mario Batali to find out why New York Pizza is so magnificent and got an intriguing theory out of the celebrity chef: New York’s old pizza ovens “capture the gestalt of beautifully cooked pizza.” A food development consultant believes Batali’s abstract ‘gestalt’ is, to scientists, vaporized ingredients that become “volatilized particles and attach themselves to the walls of the baking cavity. The next time you use the oven, these bits get caught up in the convection currents and deposited on the food, which adds flavor."

In other words, that famous New York flavor is the accumulated history of every pizza ever made since the oven’s first pie. But the secretive Sal Basille, co-owner of super-trendy East Village pizzeria Artichoke, wants Wired to know that great New York pizza is not to be found on Manhattan:

There’s really no good pizza in Manhattan. The outer boroughs have the best pizza.

That’s why I came here. Back in the day all the old-timers lived in Manhattan, but they moved to the outer boroughs and the trade got lost here. And they don’t show everybody their tricks. I’ve been doing this since I was 10 years old. I can’t tell you why ours is the best around; my cousin and I are like artists and we let the pizza do the talking.

Other theories about New York’s dominance point to the unique quality of New York water, which makes pizza dough and bagels so distinctive. But pizza blogger Adam Kuban at Slice thinks the water logic is tortured: “New York pizza is good because there are so many pizzerias, leading to a competitive atmosphere.”

And Domenico De Marco, owner of the legendary Di Fara in Midwood, tells us his pizza is great because his gas oven cooks at 900 degrees. Most pizza ovens today “go to 500 or 550 degrees.” Could it be De Marco owes some of his success to his oven’s doubly-volatized particles?