To find out what you'll be eating if you order a "panzerotto," let's start with what it's not. "Beef Patty?...NO. Empananda?...NO. Calzone?...NO!" unequivocally states the website of Mr. Panzerotto, a new Greenwich Village shop serving the speciality. The fried dough has found itself the subject of the new MacDougal Street cafe, which serves nothing but the half-moon shaped treats stuffed with different fillings.

The shop's run by Christian Francone, a native of Milan whose parents are from the Apulia region of Italy, where the panzerotto's said to have originated. Francone left a stint in law school to follow his passion and join in the family business: food.

Named for the puffing of the dough after the fryer—panza translates to "belly" in Italian, like from eating too much fried dough—the panzerotto are similar to calzone in shape and fillings but are fried instead of baked. Francone said he spent six month perfecting his panzerotto recipe in his mother's kitchen, trying "every kind of flour" before settling on just the right combination.

Tomato sauce and mozzarella are a classic combination for fillings, which are typically savory, but ingredients including ham and spinach are common, too. Francone's also offering vegan versions, stuffed with things like vegan cream cheese, and some sweet panzerotto, too, like one filled with Nutella and ricotta cheese and another with vegan yogurt and mixed berries.

Mr. Panzerotto isn't the only place to find this Italian comfort food, but it's the only place making it their full-time job. "We hope to see people walking down the streets holding this favorite Italian classic," Francone tells us. And with all those students milling around looking for an inexpensive but filling meal, that's likely to be the case. 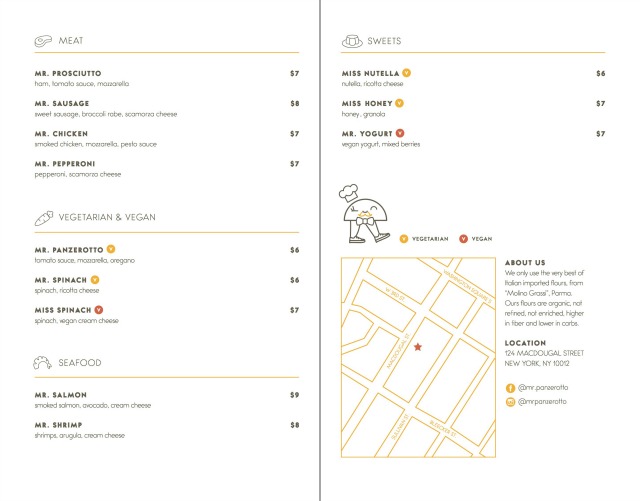 #fried food
#greenwich village
#Mr. Panzerotto
#new restaurant and bar radar
#panzerotti
#original
Do you know the scoop? Comment below or Send us a Tip