NYC Food Trucks Will Get Letter Grades In December

After a year and a half of debate, the NYC Health Department has announced a letter grading system for food carts and food trucks, which will begin next month.

It's believed that it will take two years for all carts and trucks to be brought under the system, according to the DOH announcement:

This program introduces a scoring system similar to that used in restaurants. Mobile food vendors will now receive points for violations at their food safety inspections, and their total inspection score will correspond to an “A”, “B” or “C” grade, which will be posted on the unit. The new letter grading program will apply to all 5,500 food carts and trucks authorized to operate in New York City and is required under last year’s Local Law 108.

In order to locate carts and trucks when they are due for inspection, the Health Department will attach a location-sharing device on every unit. These data will only be accessible to Health Department staff or agents of the Department, and they will be protected from disclosure in all instances except where ordered by a court. Food carts and trucks will also be getting new permit decals that can accommodate the letter grade. It will take two years for all carts and trucks to be graded, similar to the rollout for restaurant grading in 2010. 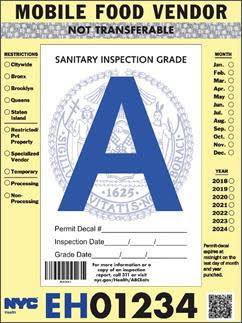 The Health Department also says it will delete location data from the tracking devices after 24 hours. However, the Street Vendor Project is still concerned about the tracking system: "While vendors getting letter grades is good for everyone, tracking vendors' movements with GPS devices could have severe consequences for our mostly immigrant communities."

Acting Health Commissioner Dr. Oxiris Barbot said, "Letter grades on food carts and trucks will help New Yorkers see how these businesses fared on their latest inspection, right when they want to place an order. Just as diners appreciate letter grading in restaurants, we expect this program to be popular among customers of food carts and trucks."

"I cannot imagine someone not looking for a restaurant’s letter grade from our city’s Health Department before deciding whether or not to patronize a restaurant," said Council Member Karen Koslowitz, the prime sponsor of the law. "The letter grade has become absolutely essential as it relates to restaurants. Yet, every day, countless numbers of people in New York purchase food from a street vendor without knowing to a general degree the cart’s compliance with the NYC Health Code. I believe that the customers who buy food from a street vendor deserve to have the same ability to make an informed decision as do patrons of restaurants."

#department of health
#food truck
#food truck grades
#restaurant grades
Do you know the scoop? Comment below or Send us a Tip