People who paid between $20 and $150 to attend the NYC African Food Festival at the Brooklyn Navy Yard this weekend are demanding their money back, posting on Facebook and Instagram that the event only delivered a handful of the promised "25+" chefs and vendors and shouldn't have been staged inside the Duggal Greenhouse in the middle of a heatwave.

"It was a total and EPIC DISASTER," wrote Barbara Shirley Napoleon on Facebook this morning. She continued:

First of all, these SCAM ARTISTS charged people to attend an event in a greenhouse with no air conditioning in the middle of August in 90+ degree weather. A greenhouse is meant to trap heat and humidity! Like WTF? People were literally DRENCHED as soon as they walked in. They promised a meal and two drinks, depending on how much you paid for your tickets, and did not deliver. There were supposed to be over 25+ vendors and there were probably less than 10. There were NO rising star African chefs, NO cookbook publishers, and NO sample dishes. Folks were literally on line for an hour because there were practically NO vendors.

Another disgruntled attendee warned that the event was "hot as hell":

Horribly disorganized!!! #nycafricanfoodfestival y'all could have done so much better. There was no type of ventilation, inside was way hotter than outside. Only 2-3 vendors with lines that took hours to get food (if you were lucky to get any) there was only ONE large fan one lady passes out because of the heat inside.... And they still tried to charge $3-5 for bottles of water!! Such a mess! No one knew what was going on at all! #nycafricanfoodfest #sodisappointed and to top it off they are deleting all the negative reviews from their Facebook page! 😡 #wasteoftime #findagoodrestaurantinstead #nyc #brooklyn #NavyYard

"They were charging between $3 and $5 for a bottle of water in a place with no air conditioning," said Chanice Husbands, 26, who came from Mill Basin to attend on Saturday. "There were two or three fans in a place that's meant to keep heat."

"Organizers should be charged with fraud," wrote attendee Timothy Naylor. "There is no way they did not know they were going to come up criminally short of what was promised several days before the event."

Others alleged that they arrived shortly after noon on Saturday, the scheduled start time, and were told that food would not be set up for at least an hour. Some who had purchased tickets said that they ended up paying for food out of pocket, on top of ticket cost.

"I got two early bird tickets, $22 apiece, which got us access to a giant sweltering room that somehow didn't have enough places to sit despite being ten times as large as it needed to be, with maybe six food vendors," wrote attendee Ethan Bassford.

Afropolitan Insights founder and festival organizer Ishmael Osekre told Gothamist on Monday that he made several missteps in organizing the event. He said he chose the greenhouse venue out of concern that it might rain. Then, he couldn't afford to rent it for an additional "loading day" to set up booths. "So the five hours to set up all the vendors definitely impacted the event because folks were arriving while vendors were setting up," he said.

Osekre also said that the food tickets were only intended to apply to individual chefs on the venue floor. He decided after the event had already begun to ask the more established restaurants to start accepting tickets. "Some restaurants took a while to get on board," he said.

"We had all these vendors, but a lot of them on the final stretch hadn't taken care of the insurance," he added.

Michelle Celestin, 27, was one of the vendors to back out. She's from Bayonne, New Jersey and says she paid $500 to participate in the festival, selling spices and coffee imported from Tanzania. She says she decided to back out last Friday, when she received an e-mail with information pertaining to parking, setup times, the size of her table, and other parameters of the festival—details she says came far too late. "Usually at events you know the size of your table so you can order banners and signs," she said.

Celestin says she received no response to her refund request, and on Sunday went to the venue herself to confront Osekre. The two got into a verbal argument and, Celestin says, security intervened and pulled her aside. "I was like, 'I'm here to ask for a refund,' and he was like, 'Oh you guys messed up my events by not coming, because you had the information,'" she recalled. She still hasn't received a refund, and is considering small claims court. Osekre said he would confer with his vendor coordinator about this particular situation, adding that "giving refunds is a part of doing work like this." 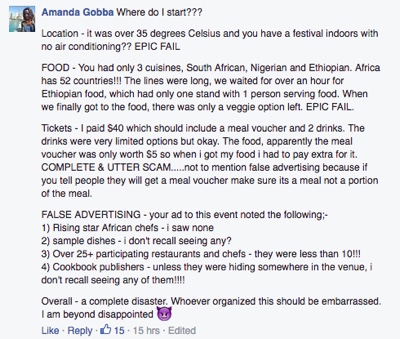 One Facebook user echoed Celestin's accusation that vendors were not notified about the location, parking, and setup times until the morning August 12th, one day before the event. Alongside screenshots of the e-mail sent to vendors they wrote: "One day before the event they send them their info!!! Refund the vendors and the attendees SCAMMERS. You screwed EVERYBODY. ACCEPT RESPONSIBILITY. LIARS!!"

Osekre countered that that e-mail was intended as a reminder, and that he did walk-through tours for vendors two weeks before the event.

As for refunds, Osekre said that beyond the VIP guests—who paid $150 dollars for food that never materialized and a private session with a chef who arrived late—he "didn't know" if refunds were possible and is trying to understand the extent of the demand.

"It was a first time event. We expected that it wasn't going to be perfect," he said, adding, "We made sure that we put clearly on the Eventbrite page and the website that unless the event is canceled or postponed all sales are final. That's not to say that we were preparing to really fuck up the event and run away with everyone's money. But we wanted to leave a little room for error."

Early Sunday morning, in anticipation of the second day of the festival, Afropolitan Insights posted an apology on Facebook. "Hey guys," it stated. "We experienced a lot of technical difficulties that got in the way of our ability to produce and deliver. We sincerely apologise for the inconvence [sic] that this caused and will rectify those problems for the second day of the festivities."

Many people weren't having it, accusing the event team of scrubbing their event page of complaints (Osekre did not immediately respond to a request for comment on this allegation).

Videos from day two suggest that the event was still hot, and sparsely attended. Eden Hagos, who blogs as Black Foodie, posted that she "really wish[ed] there was more food at the African food festival" and that "By the end I almost passed out from the heat but the watermelon juice brought me back to life."

Before the heat took over, really wish there was more food at the African food festival. I went in with high hopes, but I'm glad the food I did try was good. Plus I got to connect with other dope black foodies like @charmsthefoodie @chefmelandco and many more. By the end I almost passed out from the heat but the watermelon juice brought me back to life 🍉 #blackfoodie #nyc #brooklyn #nycafricanfoodfest

Some people were sympathetic. "Thank you for the response! You are obviously a good person and I believe that soon you will do the good deed of issuing refunds," wrote Georgie K Harris on Monday.

"On August 13th, 2016, thousands of people were scammed at an event called The African Food Festival hosted by Afropolitan Insights and Ishmael Osekre," the group description states. "This group is to help attendees come together and brainstorm on how we all can host a real African Food Festival. All suggestions are welcomed!!!!!"

"We didn't set out to fail," Osekre told us. "And Sunday in my opinion was a better reflection of the kind of festival we were going for. The vendors were already there waiting." He added that he'd like to work out the kinks and do the event again next year.

#brooklyn navy yard
#epic disaster
#NYC African Food Festival
#original
Do you know the scoop? Comment below or Send us a Tip