NY Tomato Growers May Cash in on Salmonella Scare 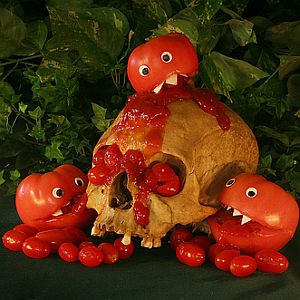 Everybody relax: New York grown tomatoes are perfectly safe to eat raw, at least according to the government. Yesterday the State Department of Agriculture tried to calm a jittery public with an announcement that a recent salmonella outbreak is not linked to tomatoes grown in the Empire State. At least 23 people have been hospitalized across the country, mostly in New Mexico and Texas, where the first fatality was reported yesterday.

National chains like McDonald’s have pulled most tomatoes from their products, and local schools have stopped serving them in cafeterias, so some New Yorkers are still suffering collateral damage. The Florida Growers Exchange tells the Post that they’ll lose about $40 million due to the outbreak, though the FDA has yet to pinpoint the source. All this may be good news for regional growers, who the Post describes as “juiced” about the chance to make a killing off their non-killer tomatoes. But according to the Poughkeepsie Journal, most of upstate tomatoes won't be ripe until later in the summer.

The Daily News has a handy visual guide with Dos and Don’ts for today’s safety-first tomato shopper, and they get some reactions from local consumers like 21-year-old Kristen Giordano, who boldly declares that “You can't live life being scared of vegetables.” (She’s obviously never seen this.) Plenty of safe tomatoes can still be found at farmers’ markets around town, and supermarkets such as D'Agostino and Fairway are letting customers take their chances. Talking to the Post, one jaded Fairway manager dismissed the situation as “all hype.”

#fast food
#local
#mcdonald's
#new york
#outbreak
#safe
#salmonella
#tomato
Do you know the scoop? Comment below or Send us a Tip