Our latest installment of Quick Bites brings us to Orchard Street for a new Nom Wah.

THE VIBE
The historic Nom Wah Tea Parlour was founded in 1920, and to this day remains open on historic Doyers Street (a.k.a. the Bloody Angle, notorious as the site of ghastly gang murders). It's one of NYC's most famous restaurants, and has maintained its popularity throughout its now nearly 100-year-long run. So when Wilson Tang took over the family business in 2012, he launched a wave of expansion—there's now a Nom Wah in Philadelphia, Nolita, in the Canal Street Market, and, just last week, Nom Wah Tu on Orchard Street opened. This latest one took over the team's excellent but apparently unsustainable Fung Tu spot.

The layout of Nom Wah Tu is basically the same as its predecessor, though high communal tables now stand across from the row of booths in the main dining area in the back. The bar up front takes up about half the narrow space, adding a night-on-the-town air to the place, an atmosphere that's entirely appropriate for this Division Street Triangle area. People-watchers might also consider the somewhat-cramped seats looking out onto Orchard.

Most important, Fung Tu's superb chef Jonathon Wu is back in his kitchen for Nom Wah Tu, putting his creative spin and considerable talent on a few dim sum classics. The restaurant is officially in "soft open" mode, with a limited menu and brunch still to come, but these are seasoned pros here, both front and back of the house, and my meals during Nom Wah Tu's first week were exceptionally pleasant experiences. 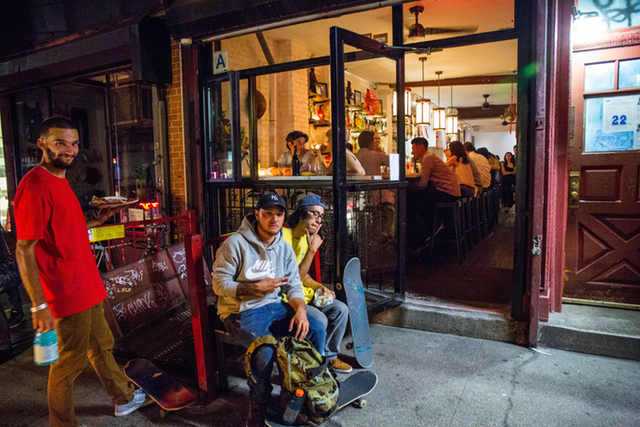 Chef Wu may be holding back right now on the number of dishes you'll find at Nom Wah Tu (there are currently six dim sum plates, a pair of larger "chef's specials," and a single dessert), but as always he's going all out with his flavors. I ate almost the entire menu last week, and most everything thrilled. The Pan-Fried Thick Noodles, for example, is a fantastic bowl of food, the pile of udon-esque strands home to a colony of briny clams and gamy bits of lap cheong sausage, with fermented black beans, garlic and chives giving it extra oomph. Just as potent and equally satisfying as an entree is Wu's Duck Fried Rice, with tender chunks of the sauced and seasoned bird sharing space atop the chewy grains with oyster mushrooms, pickled beets, and mustard seed.

There are two types of dumplings on offer, and the Pan-Fried Chicken ones are terrific, with a caramelized, crackling skin surrounding a zippy chicken salad, served with cumin-chili oil and a yoghurt-dil sauce. Messy Manchuri Duck Wings taste great, the sauce hitting all the right sweet and spicy notes, some crushed peanuts adding complexity, but the meat itself is somewhat meagerly portioned. I didn't care for the Roti Pancake, served with vegetable curry for dipping, but Wu's Hot and Sour Mushrooms are among the best things I've eaten all year, a simple but deeply fulfilling dish of fat, earthy fungi wet with a tangy, fiery mala vinaigrette.

And make sure to finish things off with Wu's Rice Krispie Treat, the best such baked good "in existence" as a frequent dining companion of mine stated, and I have to agree. This thin, gooey bar is slathered with lychee icing, sprinkled with rose dust, then topped with pistachio halves and tart, sticky strawberries. It is a phenomenal, utterly unique version of the classic, and it sent me out the door wanting to come back as soon as possible.

THE VERDICT
Some outstanding dishes in a relaxed but fun space, located in a neighborhood where I find myself as much or more than any other? Perfect. Nom Wah Tu is a huge winner.

#Chinatown
#nom wah tu
#quick bites
#original
Do you know the scoop? Comment below or Send us a Tip