Another comfort food eatery inspired by regional American fare was bestowed upon us last week when Bleecker Kitchen & Co. opened on the bustling stretch of Broadway just north of Houston. The restaurant took over the coveted corner at Bleecker Street when The Corner Shop/The Vault At Pfaffs bit the dust earlier this year; NYC students and tourists who stopped by for the homey eats won't be disappointed with the new restaurant, which offers down-home fare similar to its predecessor.

Chef Steven Ferdinand, who most recently cooked at gut-busting UWS joint Sugar & Plumm, offers a menu of small and large plates including dishes taken from kitchens across the country. As with so many comfort food spots, there's a heavy reliance on Southern fare like Shrimp & Grits ($11), BBQ Pork Buns ($5) and Crispy Chicken & Waffles ($16). We take a brief sojourn up to New England with a Maine Lobster Roll, which would alarm anyone from Vacationland with its $24 price tag. Pan Roasted Chicken Breast ($21), a 10 ounce NY Strip ($29) and the more budget-friendly Bleecker Burger ($14) round out the hearty menu.

There are 60 seats at which to perch, including the white tiled bar that boasts a mural constructed from a vintage basketball court. Cocktails ($13) riff on classics, like the Cacao Manhattan with cynar amaro and cacao; New York Sour made with bourbon, lemon juice, sugar and mulled wine; and the Concord Mule with vodka, Meyer lemon, grapes, ginger and thyme. Beers are priced a little higher than average; you can get a $7 Brooklyn Lager and, inexplicably, Original Sin Apple Cider for $8. They're also doing alcoholic coffee beverages, which will come in handy when they launch brunch on the weekends. 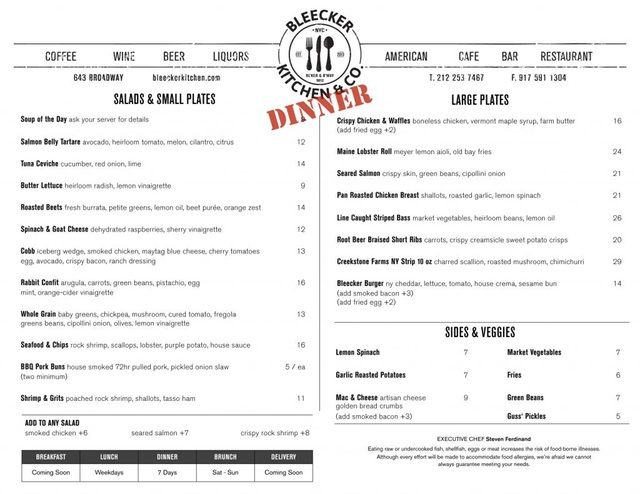 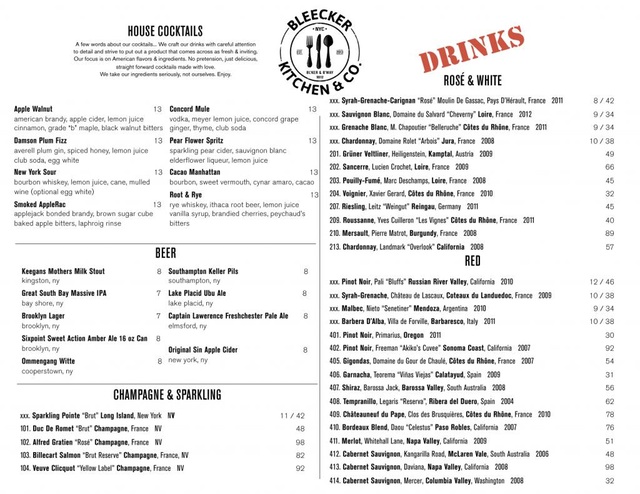