When Chef Jose de Jesus first began thinking about creating pop-up dinners throughout the Bronx, one image that came to mind was the show Breaking Bad. He imagined Heisenberg and Jesse cooking meth in an underground lab, then scrambling to escape before a raid. “I wanted to be an underground chef,” he told Gothamist. Breaking Bread, his Bronx-based pop-up dinners, have a secret location, a secret menu, and in the beginning, you needed passcode to get in. (He put his 11-year-old daughter in charge of enforcing the passcode.)

Chef de Jesus, who goes by Trill Cooker, has been hosting pop-up dinners in the Bronx for over a year. He started at his home, then expanded to Gun Hill Brewing Company, The Bronx Public Library, the Bronx Brewery, and he has recently set up a residency at Mottley Kitchen, a breakfast and lunch cafe that opened less than a year ago in Mott Haven.

De Jesus is a Bronx native, who grew up in a Puerto Rican family, and his interest in cooking grew while watching his mom in the kitchen and accompanying his grandmother to Vivero Live Chicken Market to pick out dinner. After odd jobs and culinary school, he landed at the executive dining room of Deutsche Bank, a job with a good paycheck and perks, but not the prestige of a Michelin-starred restaurant. He could have worked at Jean-Georges, but would have had to accept $9 an hour. “Diapers are expensive,” he said, and with a growing family, that just wasn’t possible.

He started catering on the side, working at private dinners, growing his career, and for years TV stardom was just barely out of reach. He was the backup chef for the Food Network show Beat Bobby Flay for seven seasons and on Chopped for one, where he stayed in the dressing room, working on his laptop, waiting to be called out if someone sliced off a finger or had a meltdown and quit. But he never made it on screen.

But his moment may come soon. De Jesus recently finished taping a TV cooking show where he is a contestant, which is scheduled to come out in the fall. Until then, he is making a name for himself with his Bronx pop-ups. I went to one on Saturday, for a dinner for eight, where we all sat around the prep station at Mottley Kitchen for a seven course meal.

He served burrata with golden kiwi, asparagus with hard boiled egg, broccolini, scallops, salmon, and a hard-seared beef sliced thin with marinated summer squash. Simple, seasonal ingredients expertly prepared and professionally plated. For desert he made a tres leches cake, and a warm chocolate chip cookie, his daughter’s recipe. She sat next to her grandmother at the dinner, taking pictures of the food as it came out, as we all did. 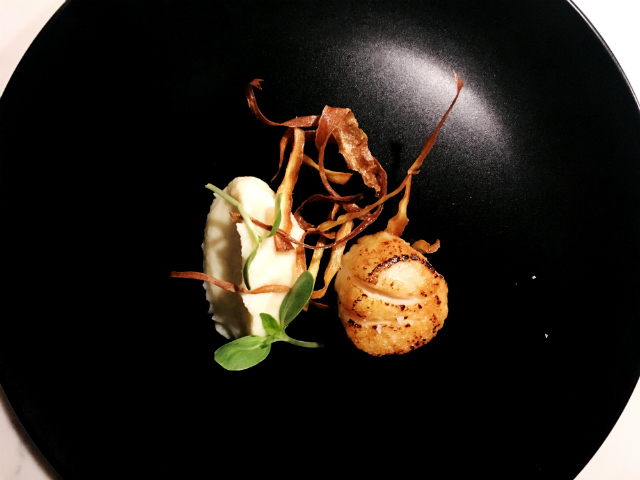 Around the table were mostly Bronx natives, along with a couple of California transplants who live in Bushwick. (They all learned about the dinner through Twitter or Instagram.) As he cooked and plated, de Jesus talked about the food, and also how food in general has affected his life. “Being a Puerto Rican kid from the Bronx, flowers get me sometimes,” he said, arranging a bunch of flowering cilantro that he had clipped from an herb pot on the roof. When he brought out the salmon dish with heirloom tomatoes, he called it his “fuck you dish,” (apologizing to his daughter for the language) because the dish plays an unfortunate role in the upcoming cooking show he appears in. 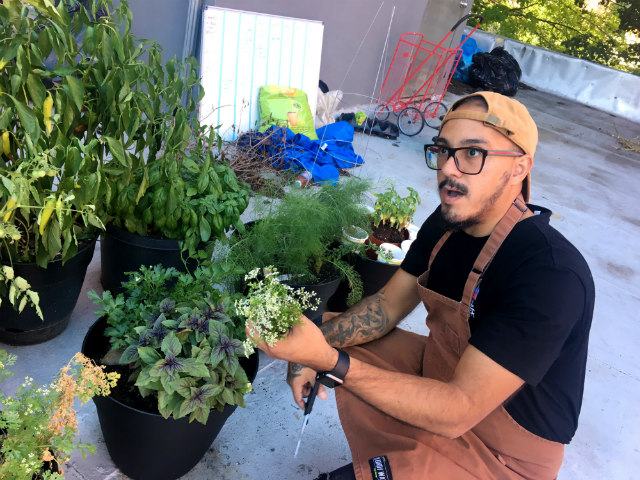 For now, de Jesus has no plans to open a brick and mortar restaurant, and instead will continue hosting pop-ups. It’s not the traditional path, but it might be the best way to build a following, in a borough that’s not as well known for high-end food. “In the Bronx there’s no such thing as a chef’s table, in the Bronx there’s really no such thing as chefs,” he said, explaining that many chefs at restaurants in the Bronx are still invisible. “A lot of restaurants in the Bronx are not driven by the chef, a lot of them are driven by drug dealers who have a lot of money.”

And the pop-up might be the perfect medium to get people out and dining in the Bronx. In general, people are eating out less. It’s far more likely that you are eating takeout at home with your significant other, binging on a cooking show while trying not to spill wine on your laptop. You are far more likely to watch someone cook on Netflix than at a restaurant. At this pop-up, we sat side by side, all facing the same direction. But instead of watching a comely team of amateur bakers fumble about in a sunny tent in England, we got to chat with a chef in the Bronx, laughing at his jokes about going out to the Sizzler as a kid, oohing and ahhing at his tres leches, and swapping Instagram handles with each other. And at the end, we didn't have to argue over the bill.

Dinner tickets start at $85, and the next dinners are on July 16 and July 22. You can send a message to Chef de Jesus or DM him on Instagram for more information.

#bronx
#food
#pop up dinners
Do you know the scoop? Comment below or Send us a Tip
A new Gothamist is coming! We’ve moved comments over to our beta site. Click here to join the conversation and get a preview of our new website.