No Topping Left Unturned At Inventive New The Doughnut Project

Banana curry, halva, prosciutto—today's doughnuts aren't resting on their glazed laurels alone. The newest of NYC's outside-the-box doughnut shops has been stealthily slinging their yeasty wares in the West Village's Morton Street for two weeks. But starting Thursday, The Doughnut Project is blowing the lid on their as-til-yet under-the-radar operation, throwing an opening party on Thursday featuring free doughnuts.

Proprietors Troy Neal and Leslie Polizzotto met more or less by chance after Polizzotto and her husband became regulars at the bar Neal tended at Eataly. A mutual love for doughnuts was discussed and what followed was a three year process of recipe testing and design work by Neal and ending a law career to start a small business by Polizzotto. Now, the duo have introduced their collaboration to the city and are hoping that some interesting flavors, a unique DIY doughnut option and some quirky designs will help them stand out in this dense artisanal doughnut scene. 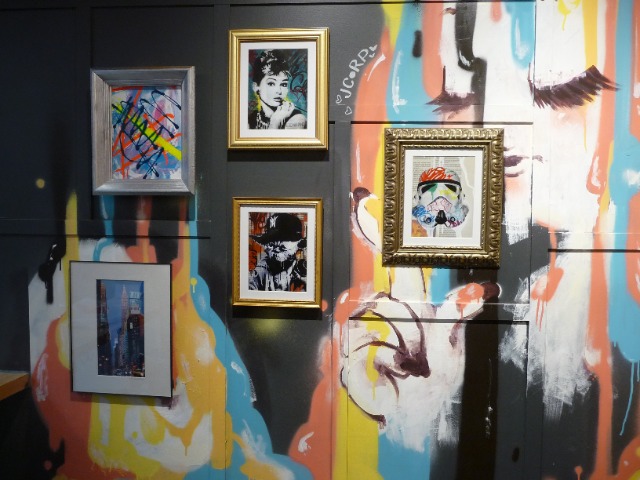 "We call it 'urban meets Paris art salon,'" Polizzotto said of the small cafe's decor, which includes framed pieces of Yoda wearing a Yankees hat and a graffiti'd portrait of Audrey Hepburn as Holly Golightly. Eventually, walls will bear the shop's signature t-shirts with images of spray paint cans (a nod to a spray painted mural behind the coffee service) and their logo, complete with a big knife and a rolling pin, all designed by Neal.

But doughnuts are the star of the show, obviously, and with plans to launch a create-your-own doughnut station soon the possibilities are going to be endless. Core doughnuts like the electric pink "These Beets Are Dope" (Beet-Ricotta) and the more understated "Bronx" (Olive Oil-Black Pepper) will be available daily, with seasonal specials—currently "Pumpkin King" (Cinnamon-Pepitas)—rotating with what's fresh.

West Coasters will recognize the Maple Bar, though its been given the gift of bacon, too, and heat seekers can find solace in the "Bulletproof Tiger," a piquant and spicy blend of pineapple and habanero glaze. 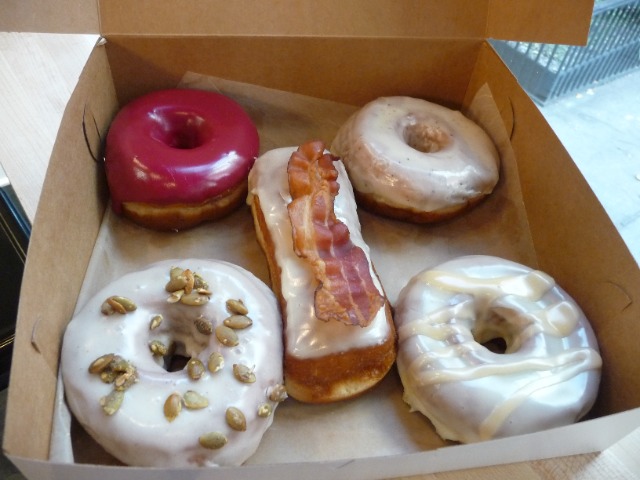 Their classic yeast doughnuts can be enhanced with a variety of glazes (bone marrow chocolate, anyone?), plus toppings from nuts, seeds and fruit to more bananagrams options like guanciale and cheeses. Signature doughnuts go for $3.75 a pop with bacon and pancetta-topped ditties at $4.25. Show up Thursday between noon and 4 p.m. when you'll be handed a doughnut completely free of charge.

10 Morton Street, 212-691-5000; website. Open weekdays 8 a.m. and 9 a.m. weekends with flexibly closing hours until they get things settled in so call to confirm before heading over.