Nickel And Diner Successfully Updates The Diner Model In Chinatown Our latest installment of Quick Bites brings us to Chinatown for a modern diner that gets it right.

THE VIBE
Ah, the NYC diner, site of so many rowdy late nights and hungover mornings of our collective youth. My locals in the 1970s and '80s were Leshko's, Tom's, College Inn, and Broadway Diner, but really, the beauty of the beast was that you could go to any such joint in town, order your usual (Cheeseburger Special or Corned Beef Hash with eggs up and rye toast, depending), and know everything was going to work out fine.

That irresistible pull of nostalgia is one reason why so many restaurateurs try for the "elevated diner" concept, but it's tough to do it well. The food and atmosphere have to be familiar without feeling phony, and with prices inevitably much higher than the actual diners of everyone's personal yore, you can't just be slinging total grease-bombs or (worse) overwrought fancy crap either.

All of which is to say that Nickel and Diner, brand new on the western edge of Chinatown, is something of a miracle, a reboot that succeeds, often spectacularly, on all fronts. 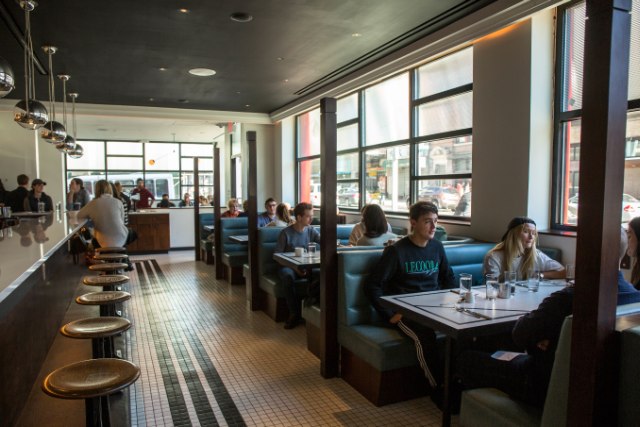 The space is fantastic, with an enviable expanse of windows fronting Centre Street and rounding the corner on Howard letting in loads of light, the red-columned facade spruced-up and simplified from the days when that "5 Combinations $5.00" buffet place lived here.

There's a lengthy lunch counter inside, the row of comfortably spaced, fixed backless stools fine for couples or single diners. And the expansive, well-padded booths are like a dream. Rather than cramming in a row of two-tops in the main dining area, owners Johnathan Chu and Selwyn Chan give their booths room to breathe—a curve at one end makes them almost wraparound banquettes—and you could easily squeeze in a crew of five or six here if need be, though they're luxurious for four.

The sunny back dining room has two more booths plus some tables, and there's also seating at the all-day coffee-and-pastry station by the front door. White tiles and mid-century-ish lighting fixtures complete the clean, retro look. And though it's technically still in soft opening mode—dinner service starts next week, or maybe the week after that—the busy staff is totally on top of things. Everyone, myself included, seemed really happy to be here.

THE BITES
The food at Nickel and Diner doesn't overreach, the prices are sensible, and almost everything I ate at both breakfast and lunch was outstanding. The kitchen really knows what they're doing, and they also obviously care enough about their craft to do it well.

Start with breakfast, featuring the best pair of pancakes I've had in years. More flat than fluffy, though still plenty soft and moist, these buttermilk beauties are studded with macadamia nuts for a nice crunch, and the addition of sea salt, which sounds like a trendy gimmick, is handled perfectly, amplifying the buttery sweetness. Kicky apple compote and dark syrup complete your plate of brunchy heaven.

Also excellent is the Classic Egg Sandwich, with two kinds of meat (country ham and smoky bacon), two runny eggs, gobs of melted cheddar, and a light smear of pesto, all within the ideal vehicle for such a thing: a kaiser roll laden with poppy seeds. A must for BEC lovers. The one miss of my meals here was the Salmon Lox on an unfortunately toasted pumpernickel everything. A crock of Hollandaise does a decent job pulling cream cheese duty, but the whole thing is overwhelmed by a bitterness from the steamed spinach and burnt seeds.

Several delights await you at lunchtime, including an outrageously good bowl of Chicken Soup. The broth is rich, salty, with the proper amount of greasiness, the diced-up bird surprisingly tender, and the trio of fat dumplings stuffed with sweet, creamy ricotta. Equally successful are the Nickel Sliders, constructed in straightforward fashion with a juicy beef patty, melted cheddar, pickles, fried onions, and ketchup on a potato bun. 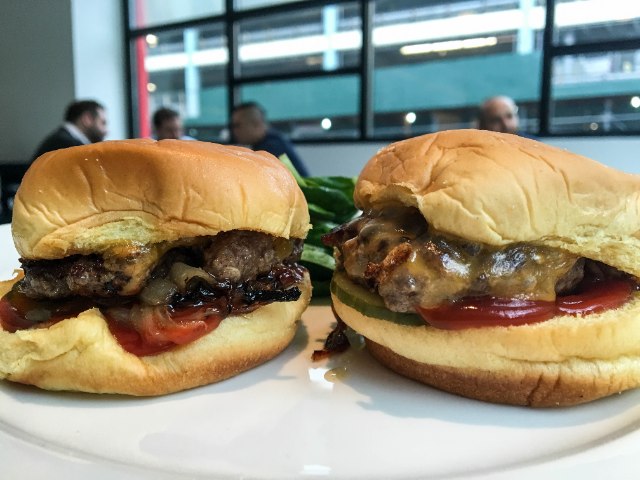 Instead of fries I got the Tempura Vegetables, a pile of interesting things like shishitos, Chinese eggplant, green beans, squash, and chili peppers. Again, the greasiness was exactly right here, imparting a ton of flavor without loosing the crackle of the batter. There's a puddle of pesto beneath it all, too, for dipping.

And don't sleep on the desserts. The baked goods up front include a first-rate flourless Chocolate Macadamia cookie, all soft and gooey with deep cocoa flavors, and the Kaffir Lime Tart is like the best key lime pie in town, but with chewy, sweet coconut crunches tossed on top bringing an additional level of pleasure to the party.

THE VERDICT
Nickel and Diner is destined to be a hit. You can still walk in and get a table even during prime brunch hours, but don't count on that lasting much longer. And when they start dinner service and get their liquor license? I can only hope it won't be completely overrun with the partying masses of Nolita and Soho. If things stay sane, though, this could be my total go-to in these parts for a long time to come.

#Chinatown
#nickel and diner
#quick bites
#original
Do you know the scoop? Comment below or Send us a Tip