New York's Only "Pay What You Feel" Restaurant Closes

"Pay What You Feel" as a concept is great, and it works just fine in some places, but sadly not all. For instance, Williamsburg. Last November, the Santorini Grill there started a "pay what you feel" policy for in-restaurant diners (delivery and to-go was still full-price). We certainly enjoyed it and New York named it one of their reason to love New York this year. But sadly, four months later, the restaurant has closed. And despite what the signs in the windows say, it is for good. 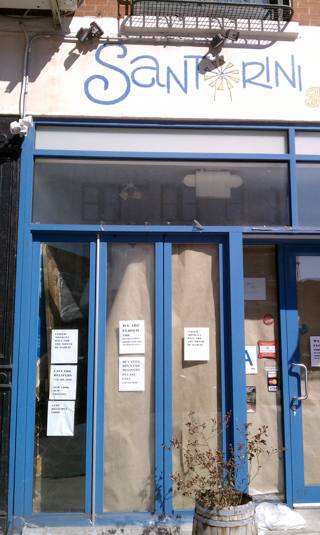 "I was thinking of trying to change the menu and look," Paula Douralas, the owner of the late restaurant tells us explaining the renovation mentioned in the signs. "But I refuse to put another $200,000 in there to try for another go." And while Dourales doesn't blame her good natured payment policy on the shuttering, she says it didn't in the end help things. "Actually, it hurt it," she says. "It made damage. Before that, business was a lot better. It just got... The business went down. We couldn't make up the expenses to pay the bills. Not because people abused it. They just stopped coming." A fact she found especially surprising since things had been doing fine enough before she introduced the system.

Another issue, however, was the changing face of Williamsburg. "Although the people are very nice it has a big turnaround. A lot of people moved away because they couldn't afford it. They got fired or what have you. I did a lot of going away parties for my customers. And the new kids that came in, they didn't know we were there."

Without her restaurant to run, Paula is taking some time off ("A lot of love and a lot of money went into that place. I need a break.") but hopes to return to the restaurant game soon enough. She's currently thinking maybe a smaller space in Astoria come the fall. We wish her the best. And sincerely hope this doesn't scare others away from giving "Pay What You Feel" a shot.

#brooklyn
#closings
#pay what you feel
#santorini grill
#williamsburg
Do you know the scoop? Comment below or Send us a Tip