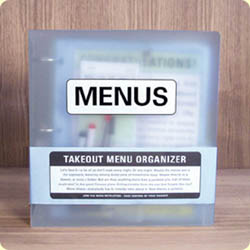 Your overstuffed kitchen drawer of take-out menus is minuscule compared to the menus Daniel Rayas collected over a four month period. Newsday has a fantastic profile of the Texan grandfather who moved to New York City to help care for his newborn granddaughter and found a flexible part-time job that has taken him all over the city. Looking to make some money to pay for room and board, Rayas responded to an ad on Craigslist offering cash for collected menus. It was placed by online eatery guide Allmenus.com, and they put him to work immediately, offering $2 per menu collected.

Rayas, who says his motto is "No menu left behind," walked up and down city streets soliciting menus from pizza parlors, Chinese takeout restaurants, taquerias, and any other place that sold food and had a delivery menu. He collected 10,000 different menus in four months and wore out a pair of boots in the process. Now an expert at popping blisters and taping his feet, Rayas once walked into a hardware store and was instructed on a method to repair his soles by a clerk from the Dominican Republic (it involves a $4 bottle of compound cement).

Along the way, Rayas has picked up more than menus. He's learned the streets of New York. He's even seen some sights, including Louis Armstrong's house in Corona.

"But the people have been the real experience," he said.

The second of 18 children and an eager conversationalist, he's talked with Afghans and Koreans in Flushing, Indo-Caribbeans in Richmond Hill, Jamaicans in Jamaica and Spanish-speaking immigrants all across the city.

"Chinese people believe in menus," he said. "Jamaicans don't. I ask, 'Do you have a menu?' They point to the wall."

Having scoured the city, Rayas has journeyed to other New York towns like Rochester, Syracuse and Buffalo. Newsday reports the AllMenus folks have sent him to Chicago where he blew through the Windy City vacuuming up menus. And they may even send him to Europe to collect menus on a different continent.

Daniel Massey's article has a lot of great specifics about Rayas's menu hunt, including details like the most common restaurant name and his favorite restaurant slogan (Great Wall, and Seven Days Without Pizza Makes One Weak). City Councilman Simcha Felder wants to ban delivery menus dropped in residential buildings, which would probably be a boon to an online repository of takeout place menus. Until that happens, however, Daniel Rayas will keep collecting them like found $2 bills.