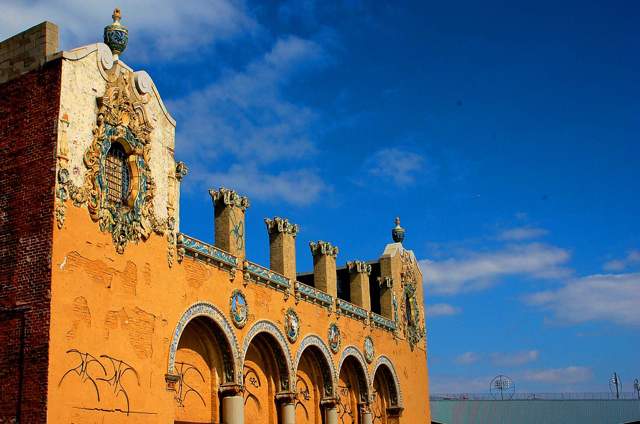 Photo of Childs Restaurant at Coney Island in 2007, courtesy Rob Hoey. Childs was landmarked in 2003.

This past year, both coal oven SoHo institution Vesuvio Bakery and greatly loved restaurant Florent closed, along with scores of other restaurants and cafes throughout the city. A number of Harlem establishments seemingly disappeared overnight. In terms of historic restaurant reboots, 2008 was equally bad: Gage and Tollner was set to re-open, but the new tenants just disappeared. Elsewhere, the return of the O.G. speakeasy was delayed: Chumley’s 2.0 is still planned for 2009, its reopening to coincide with the two-year anniversary of its original structural collapse.

With a nod toward the big picture of New York City’s restaurant history, Brooklyn writer Pat Willard offered an appreciation of five historic restaurants that no longer exist, and five that are still open. Willard’s most recent book, America Eats!, tells the tale of forgotten guidebooks from the Great Depression commissioned by the WPA, many of which documented an ever-changing American food culture. If you think about it, that’s a lot like what bloggers like Lost City and Jeremiah’s Vanishing New York are doing now—documenting the city during a recession marked by buildings, restaurants and signs that come and go.

Pat Willard’s five restaurants that are no more:

- The great Childschain was mentioned fondly and often in literary stories of NYC from the 1920s (Edmund Wilson, F. Scott Fitzgerald) to the 1950s, when their locations started closing. They had tablecloths, were fairly cheap and good, and also had dancing and live music.

- The "Oysterman" restaurants, usually in Lower Manhattan. Billy The Oysterman had several locations; some as far up as midtown. Dick the Oysterman was on the LES, and had sister restaurants, Elizabeth Flynn by Fulton Fish Market, and Alice McCollister on 8th Street. These were sort of rough places that were known for seafood right off the docks. Nothing fancy, just fresh when oysterbeds were plentiful in the harbor.

- From more modern times, there was the Passerby in the meatpacking district. It was a victim of condo fever. Also, Cafe Marmette was terrific authentic: a very classic French bistro on east 34th between Lexington and Madison consisting of a nice old lady cooking in a modest ground floor, run-down brownstone. It closed because of real estate prices

.Five that are still there, for now:

Grand Central Oyster Bar; a saving grace in the city. McSorley's Old Ale House; praise the Lord. For steak there’s Gallagher's in the theater district, 21, and Keen's English Chop House, which was originally listed as foreign by the FWP editors. There is also Barbetta on 46th Street, an old Italian restaurant.

More information on Pat Willard’s America Eats! can be found here. The Federal Writers’ Project Guide to New York City (including restaurants) can be found in its entirety here. It was published in 1939.