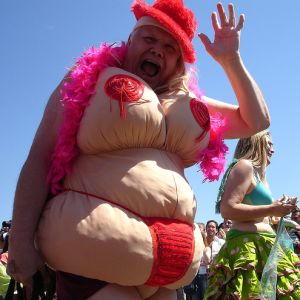 Between the 2002 and 2004, New York City residents gained 10 million pounds, becoming Rubenesque at a rate nearly three times that of other Americans, according to a survey by city health officials. Obesity and diabetes rates in the city soared 17% between 2002 and 2004, compared to a 6% rise in obesity rates nationwide, where there was no marked increase in the rate of diabetes.

The biggest obesity increases are seen in the city’s fast-growing immigrant populations and low-income groups. But other classes are also pulling their weight; the obesity rate among the middle class grew 27.6% and the city’s fat cats grew 14% fatter between ’02 and ’04. Health officials are mystified by the stats, but Audrey Silk, founder of a smokers' rights group, is quick to blame Mayor Bloomberg’s anti-smoking crusade, because people who quit gain an average of 12 pounds: “While they're trying to save one segment of society… they're getting nowhere because it has a negative effect elsewhere.”

It’s also worth remembering that life in New York in the wake of 9/11 was particularly stressful, which may have contributed to overeating. Some health officials are also blaming soda consumption for the fattening, because 27% of adults drink one or more sodas a day. Whatever the reasons, the bottom line is huge: Over 1.7 million city residents are obese, while over 700,000 have diabetes. Gretchen Van Wye, a city health department official, says the study proves “we need to move forward with initiatives like the green carts to make sure New Yorkers are getting their fruits and vegetables.”

#diabetes
#fat
#new york city
#obese
#overweight
#smoking
#study
#Survey
Do you know the scoop? Comment below or Send us a Tip
A new Gothamist is coming! We’ve moved comments over to our beta site. Click here to join the conversation and get a preview of our new website.