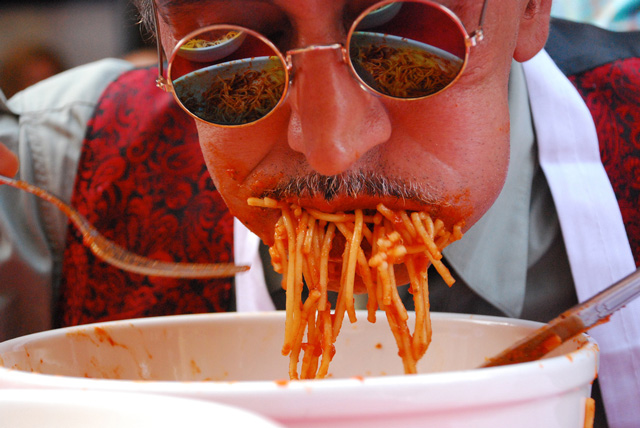 With the Nathan's Famous 4th of July Hot Dog Eating Competition just three days away, excitement is building over who will take home the Mustard Belt this year. With perennial champion Takeru Kobayashi hampered by a reported jaw problem, the Mustard Belt is up for grabs and local contendors may have a shot. Californian Joey Chestnut broke Kobayashi's hot dog-eating world record a month ago, but the New York Post profiled two men, "Crazy Legs" Conti and Tim "Eater X" Janus, who hope to stuff themselves to victory at Coney Island this year. The two men actually share an apartment in the East Village, and they've transformed their home into a simulacrum of a Nathan's Famous Hot Dogs restaurant.

Separately, yesterday witnessed the 5th Annual Tuttorosso Pasta Eating Contest on Little Italy's Mulberry Street. The event was woefully undercovered by the mainstream press, so what information we have is from the flickr photos of dietrich, who got frighteningly close to the gaping maws of the contestants. Experience won out, as the winner was a veteran of the four prior competitions, but the second place contestant made a breakthrough as the highest-placed contestant who shoveled pasta into his mouth with his hands.