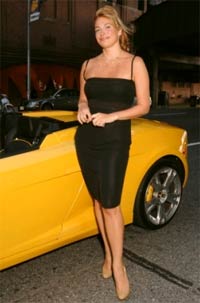 This month's Bon Appetit features this year's winners of the Bon Appetit awards, which honor leaders in the culinary field. The intimate awards ceremony took place at Del Posto earlier this week, where current and prior winners dined on a seasonal Italian tasting menu created specifically for the occasion. The awards presentations were held between courses, hosted by Ted Allen, who did his best to entertain the crowd.

New York culinary personalities made a strong showing among the award-winners -- chef Michael Psilakis earned Chef of the Year, Babbo's Gina DePalma was named best Pastry Chef, and Bobby Flay won best Cooking Teacher. As the winners accepted their statuettes, they gave acceptance speeches, most of which acknowledged the role that Bon Appetit's editor-in-chief, Barbara Fairchild, had played in helping them achieve their success.

Psilakis, who has only been cooking in New York for four years, said that he was humbled by others who have won the award before him, and discussed what an amazing experience it was to see his dish (the truffled gnudi) on the cover of Bon Appetit.

A somewhat slimmed down Mario Batali accepted Gina DePalma's behalf, and Bobby Flay, who dropped out of high school, described his realization that his position as an executive chef and a TV personality is, in fact, a teaching role. He then went on to describe his mentoring of an elementary school cooking class in Long Island City as the most satisfying thing he's ever done.

A full listing of this year's awardees can be found on the Bon Appetit website, including Jim Koch, founder of Sam Adams, winner of the Wine & Spirits Professional award, who likened the early days of selling craft beer door to door at bars to "selling bibles to the Taliban," and Seattle's Tom Douglas, winner of the Restaurateur award, who described being the "epitome of a modern restaurateur" as a "fucking fantastic" job.