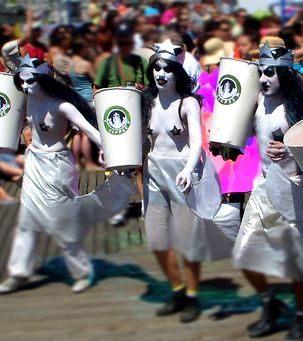 In what will be the largest class action suit ever brought by New York restaurant employees, employees are suing Starbucks for violating a state law that prohibits management from receiving part of workers’ tips.

At Starbucks, shift supervisors share the pooled tips with baristas, prompting a suit from former Forest Hills barista Jeana Barenboim, on behalf of at least 2,000 Starbucks baristas in NY who are owed at least $5 million. The lawsuit comes on the heels of last month’s California ruling, where a state judge found Starbucks liable for $105 million, finding Starbucks illegally enabled shift supervisors to take a share of the tips. Starbucks is appealing that decision and calls the NY suit a “copycat.”

The company maintains shift supervisors are not managers (though they’re in charge when managers are away and can evaluate baristas in performance reviews ) because they often do the same work as baristas. And the pay isn’t much better: A Union Square barista tells the Times she earns $10.03/hour after three years on the job, while a shift supervisor makes $10.25, also after three years.

But Barenboim’s lawyer says that’s no reason for them to dip into baristas’ tips: "It's been argued that the shift supervisors do not make a lot of money and that somehow it's justifiable that they should share in the tips. That's just beyond ridiculous and, in fact, it's incriminating towards Starbucks. It puts the brunt of paying these people on the baristas."

It’s uncertain how the badly the lawsuits will damage CEO Howard Schultz's attempts to correct his company's recent missteps, but a Starbucks Gossip commenter sees one obvious unintended consequence on the horizon: “Get ready to say goodbye to tips altogether.”