New York Gets the Boot 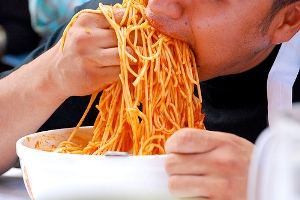 In time for next week’s Columbus Day festivities, the Post’s Steve Cuozzo lets his Ital flag fly with two gushing columns on Italian cuisine. He points out that Italian restaurants outnumber all other kinds of restaurants in New York by a big margin (and that’s not because of the ever-metastasizing Olive Gardens.) He cites seven “marvelous” eateries – Del Posto, A Voce, Abbocatto, Insieme, Fiamma, L'Impero and Alto – that “establish Italian as the cuisine to beat.” Nobu can sleep with the fishes.

But the cuisine’s popularity has one downside; now everybody and their mama thinks they’re an expert. A Voce's executive chef Andrew Carmellini tells Cuozzo how he received a “scolding in the dining room. This person grabbed my hand and said, ‘This is not polenta - I know how to make polenta.'… This customer didn't like it as much as Jimmy Dean [packaged polenta]. It hurt a little.” Hey, it's not personal Carmellini, just business.

Like many, Cuozzo is salivating over truffle season and breathes a sigh of relief that “aristocratic” Italian mainstay San Domenico – in business almost two decades – will likely hold onto its lease despite skyrocketing rents around the Time Warner Center. Their white truffle menu, which permits customers to add Piedmontese white truffles to any dish, starts October 15th.

And the Grand Marshal of this year's Columbus Day Parade is Lidia Bastianich, chef and owner of many restaurants including Felidia on the Upper East Side.