Courtesy of the Green Radish

A little while ago the Cinnamon Snail food truck owner posted a photo on Facebook, showing a serendipitous moment where he happened to pull into a service station and park right next to his new competitor: The Green Radish. At the time, the Cinnamon Snail knew nothing of the Green Radish, but seemed to welcome the new vegan truck to the turf ("Lots of luck... May there be more vegan food to choose from in more areas everyday!"). But where is this mysterious Green Radish?

We checked in with owner James Rafferty, who told us this morning that New Yorkers can expect him come September, but you can get a sneak peek this month in Brooklyn and New Jersey—"We will be at The Montclair Jazz Festival this Saturday, the 17th, and at The Afropunk Festival, August 24th and 25th."

Until the truck starts its daily service the first week in September, you can check in on them through Facebook and Twitter—where they'll post their locations when everything is up and runnning. Rafferty told us he hasn't established a permanent rotation, but is thinking of hitting up the Financial District/Battery Park City, Union Square, and Midtown.

Check out their menu, which looks pretty different from the offerings of the Snail, and even includes a No Lobster Roll ($9)—it's made of mashed chickpeas, vegan mayo, celery, and tarragon... but at press time there is no photographic evidence of this thing that we are now drooling over. 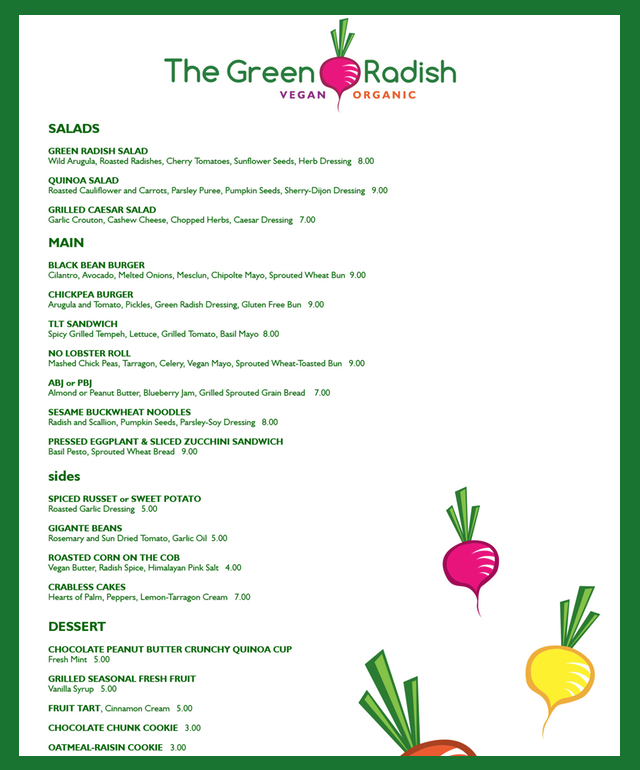 #faux lobster roll
#food truck
#green radish
#new restaurant and bar radar
#vegan
#original
Do you know the scoop? Comment below or Send us a Tip