This good-looking newcomer to Curry Hill marks the U.S. debut for chef Gaurav Anand, who comes from a culinary family in north India renowned for their catering and restaurant empire. Named for the lava-stone open fire grill originated in Punjab, the gourmet restaurant aims to make bhatti cooking more popular here. An exception is the Gilouti Lamb Kebab, which is specially prepared on a "mahi tawa" griddle and seasoned with a blend of 160 spices. Said to be so tender it doesn’t require chewing, the dish was created in honor of an old Lucknow king who refused to give up lamb after losing his teeth. The extensive menu includes a wide range of vegetarian and non-vegetarian kebabs, with entrees ranging between $9 - $15. 100 Lexington Avenue at 27th Street; (212) 683-4228

Tonalli Café: Owner Angel Tenesaca is banking on the student crowd to pack this new budget Italian restaurant in Hamilton Heights. With City College nearby, it seems as good a business plan as any, especially considering Tonalli's current BYOB status and Friday night jazz sessions. Tenesaca, an Ecaudorian who owns two Mexican restaurants in the vicinity, tells Grub Street, "the neighborhood is dramatically changing. There are a lot of American people and students coming...Right now it’s only a choice of Latin food." Chef Alfredo Tenesaca (no relation) has done time in the kitchen of Locale in Astoria, and his menu emphasizes moderately-priced house-made pastas, seafood, burgers, and, for good measure, Ecuadorian Style ceviche. 3628 Broadway near 150th Street; (212) 926-0399

d.b.a.'s Sunday Tchoup Shop: The Brooklyn branch of craft beer den d.b.a., which opened at the beginning of the year, has pretty much flown under the radar. That's some kind of shame, because proprietor Ray Deter has assembled a great beer lineup with 16 taps, cask-conditioned stuff, and a very lengthy by-the-bottle selection. In addition, d.b.a. sells 23 kinds of tequila and a lot of rare or unusual single malt whiskey; one thing that's been missing all this time has been food. Until now: this Sunday, d.b.a. hosts Tchoup Shop, its very first "pop-up" restaurant.

Named for the Tchoupitoulas Street in New Orleans, Tchoup Shop at d.b.a. (Tchoup is pronounced "chop") is a New Orleans style BBQ. The chef is Simon Glenn, whose day job is as co-chef at Metro Marché bistro at Port Authority Bus Terminal. Glenn spent ten years in New Orleans "cooking for old school, non-TV chefs" before coming to New York at places like Mike's on the Avenue and the Windsor Court Hotel. The Sundays-only Tchoup Chop menu includes choices like grilled boudin with handmade Creole mustard ($5), barbecued oysters ($2 each, or 6/$10) with spicy hoisin and scallions, "New Orleans style" peel and eat BBQ shrimp ($8), and buttermilk biscuits ($2). The full BBQ menu is below. 113 North 7th Street, Brooklyn; (718) 218-6006; Sundays from 2 p.m. "until the food runs out." — Hugh Merwin 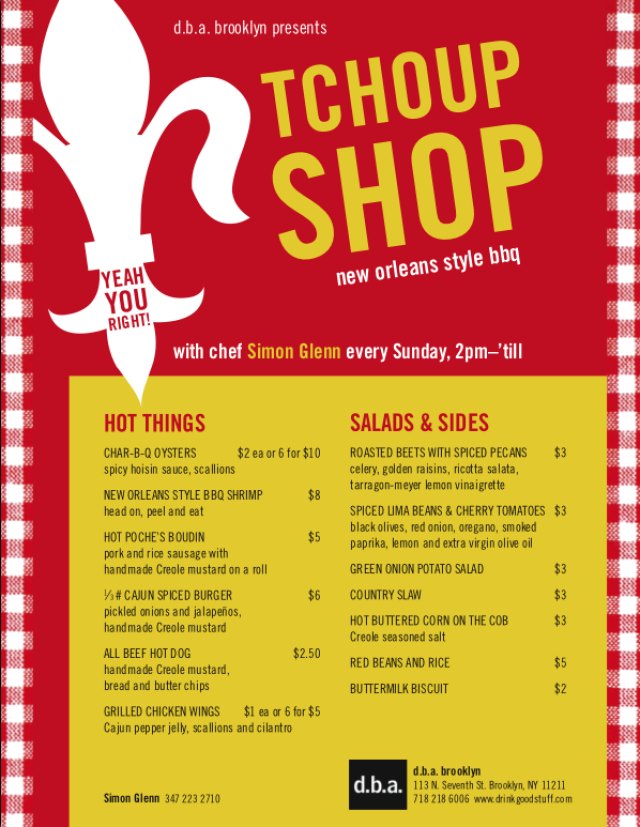