It's official: the Metro-North bar cars are back! Connecticut Governor Dan Malloy confirmed the rumors of the cars' return today at a press conference to announce added rail cars on the New Haven line. Of the 60 new rail cars being added to the fleet, 10 will be "cafe cars—popularly known as bar cars."

Along with the announcement came preliminary renderings of said cafe cars, revealing a more modern and, sadly, charmless update to the retro cars. What we're seeing: a lot of coat hooks and counters, not enough faux wood paneling and '70s color schemes. At first glance it looks like a boring ass space ship or a prison cell with coat racks, but hey, look at all those handholds, baby! 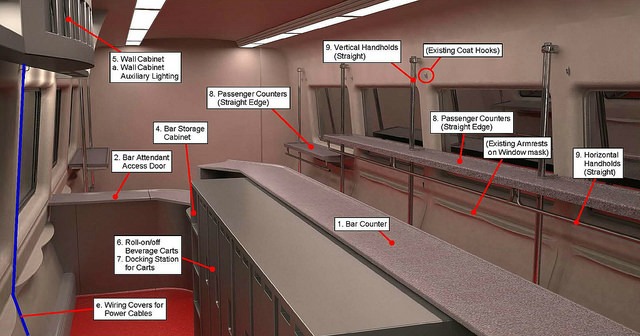 The Governor has stressed that these renderings are PRELIMINARY and the design could change when the fleet actually rolls out, meaning maybe we'll some poetry in motion at least. A timeline for the rollout hasn't been announced yet, so we'll be brown bagging it for the near future.