Our latest installment of Quick Bites brings us to Park Slope for spicy kimchi stew and much more.

THE VIBE
Chef Jenny Kwak, the co-owner (with her husband Terrance Segura) of this appealing new Park Slope restaurant, has been bringing Korean food to neighborhoods beyond K-Town for some two decades now, at DoHwa on Carmine Street and then at Dok Suni in the East Village. Both of those restaurants, which Kwak ran with her mom Myung Ja Kwak, have since closed, but with locals filling this room since it first opened last month, it seems like her new venture will keep her plenty busy for some time to come.

Haenyeo is named after the legendary female free divers of Jeju island, who for centuries have harvested shellfish and seaweed, in all kinds of weather. It's a dying trade—dangerous, often miserable conditions have discouraged recent generations from making a career out of it—but the historic fortitude and bravery of these women is revered in Korea. Kwak's homage to the Haenyeo extends to the menu, which is rife with seafood dishes.

Haenyeo can accommodate families, of course—this is Park Slope after all, and several parties with children were in attendance over the holidays—but the moody lighting, jazzy-piano soundtrack, and bold flavors clearly favor a more grown-up gathering. There are about 40 seats total, in the bar area up front and dining room in the back, and the decor, while not overly nautical, does feature a few black-and-portraits of the divers, mermaids downstairs on the bathroom door handles, and plants suggestive of ocean vegetation. As you would expect from these longtime restauranteurs, the service is warm, helpful, and professional.

THE BITES
The food at Haenyeo is unmistakably Korean, but Kwak often takes traditional dishes and plays around with both ingredients and preparation. One thing though: although matriarch Myung Ja Kwak has mostly retired, she still makes the kimchi, and it is a fiery, funky classic. In fact, probably my overall favorite dish over two terrific dinners here was the Chigae, a soupy, spicy kimchi stew thick with the fermented cabbage, tofu squares, and slices of pleasantly gamey pork belly. Spooned bite-by-bite over the accompanying bowl of kongbap, or rice and beans, and served like all entrees here with a six pack of banchan—this is a deeply satisfying dish I'll return to as much as possible this winter.

There are several Bibimbap variations available, and the Spicy Squid option I wolfed down one night nailed the crowd-pleasing dish's primary function of piling lots of different textures and flavors into one belly-filling bowl. If you're in a more straightforward mood, the simply-seasoned slab of perfectly grilled Mackerel serves as a solid safety. A few of the mains are priced in the thirty dollar range, but this latter dish was only $22, rice and banchan included, and was the most expensive thing I ate.

There's a lot of action in the Small Plates section, and portions were consistently larger than I anticipated. The fabulously rich, emphatically fiery Rice Cake Fundido, for example, harbored more gooey cheese and chunks of chorizo than I've encountered at many Tex-Mex spots. Another good starter was the Grilled Oysters, a half dozen plump bivalves lolling away in pools of seaweed butter. And the nest of Sautéed Glass Noodles was a winner as well, slick with sesame, as greasy as you'd hope, grounded by a troop of mushrooms.

THE VERDICT
Park Slope got a real gift this holiday season with Haenyeo. Jenny Kwak is an excellent cook, the menu is both comfortably familiar and studded with surprises, and the room works equally well for date night or a night out with friends. 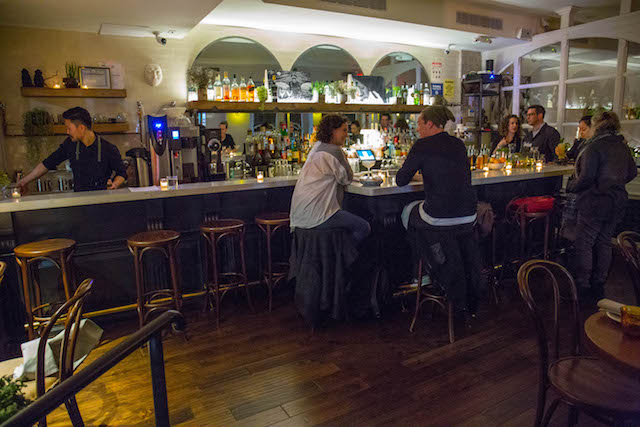 #haenyeo
#park slope
#quick bites
#original
Do you know the scoop? Comment below or Send us a Tip