Summerhill, a new "boozy sandwich shop" on Nostrand Avenue in Crown Heights, issued a press release on Monday advertising one of its cocktails next to a "bullet hole-ridden wall"—remnants of a "a rumored backroom illegal gun shop."

"Yes, that bullet hole-ridden wall was originally there and, yes, we're keeping it," the release states.

Owner Becca Brennan, a 31-year-old former attorney, said the decision to preserve the wall damage at 637 Nostrand Avenue and describe it as bullet holes for promotional purposes was a "cheeky" one. Speaking to us in the dimly-let, beach-inspired room, Brennan said, "Just looking at the angle I don't know if that is possible that that's a bullet hole. We call it that because if you look at the history, someone seriously said, 'Isn't that the place where we could buy guns?' And then we were like, 'okay.'"

According to Brennan, the idea to advertise bullet holes came from a comment on the website Brooklynian, where commenters trade gossip and details about new businesses. Last September, an anonymous commenter wrote, "If I'm not mistaken this was the corner store where you could buy a 'certified pre-owned' firearm back in the day."

Brennan said she did not investigate the gun rumor further. "I don't have any backup to that, but when you think about it as a joke like, yep, that's a bullet hole," she said.

The establishment, which describes itself as an "oasis" on Nostrand Avenue, is not the first to mine the material or oral history of Crown Heights, a rapidly gentrifying neighborhood with Jewish and West Indian roots. Between 2000 and 2010, the neighborhood's majority-black population shrunk while its white population nearly doubled, to 16 percent. And between 2011 and 2015, according to a recent DNAInfo analysis, the 11216 zip code covering parts of Bedford-Stuyvesant and Crown Heights saw among the most significant increases in high-income renters in the city. 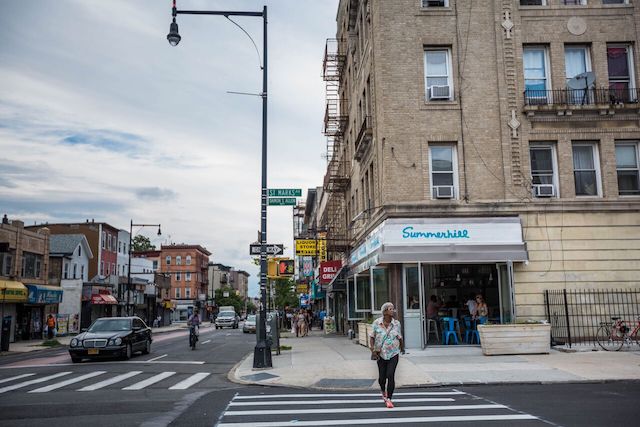 Last September, bar owner Dan Wilby pushed back at community opposition to his new Franklin Avenue watering hole, Crow Hill. Crown Heights was known as Crow Hill in the 19th century, and while historians debate the origin of this moniker, at that time the word "crow" was used as derogatory term. Wilby eventually changed the bar's name, citing a "significant and regrettable oversight," but another ode still exists in Crow Hill Crossfit. (Bar Corvo, an Italian Restaurant on Washington Avenue that used the Italian for "crow," recently closed.)

Beyond the "bullet" wall, Brennan's press release advertises Forty Ounce Rose, a brand of wine bottled to recall a 40-oz. Colt 45. Brennan said she is planning to serve them in paper bags. That choice that has been criticized at other bars for making light of poverty—an issue Crown Heights and other gentrifying neighborhoods are grappling with.

We asked Brennan to clarify her thoughts on the symbolism of the 40s. "I'm not an authority so don't feel comfortable commenting on anything other than my business—a new bar and restaurant that locals (/my neighbors) seem to really enjoy and appreciate," she said, via email.

"Actions speak louder than words," said Natherlene Bolden, 55, a founding member of the Crown Heights Tenants Union and a resident of the neighborhood since 1978. CHTU is a coalition of Crown Heights residents that challenges landlords who hike rents and harass tenants. The group protested outside of Crow Bar last fall.

"You are making money off of... negative aspects in our community which, you know, you're happy when these things go on because you can make money off of it," Bolden added. "And it's like you're not thinking about the black people or the long-term residents in the community. Or maybe you are thinking about them but they don't matter."

Can't help but 🤗 when your head bartender rides around with a forty of rose in her cage.

Brennan, who grew up in Toronto and moved to Crown Heights two years ago, alluded Monday to the evidence of gentrification on Nostrand Avenue, three blocks east of the bars and coffee shops of Franklin Avenue. She says she is close with the owners of the bodega next door, who used to rent the Summerhill space. "They got pushed out rent-wise," she said.

The comparisons to Franklin Avenue are no mistake. "As someone who lives on Nostrand, I was getting tired of walking to Franklin," Brennan said. "It's three blocks, but it's three long blocks. You just deserve something close, and a hang out, especially if you live on New York [Avenue] or Schenectady or something like that."

This story has been updated with a comment from the Crown Heights Tenants Union.

#bar
#Crown Heights
#gentrification
#Summerhill
#original
Do you know the scoop? Comment below or Send us a Tip