Twitter, the virtual embodiment of a Roman fighting pit run by basement-dwelling mouth breathers, is where the multitudes gather to rehash tired memes, spread messages of hate and influence the stock of a major company with a single tweet.

This morning, author Eric Van Lustbader—who notably continued the Bourne series after Robert Ludlum—Tweeted that his editor had fallen sick after eating at a Manhattan Chipotle, saying she'd spent seven hours in the ER from dehydration. In what appears to be fallout from said Tweet, according to Business Insider, the burrito chain's stock fell over 3% this morning, a possible sign that panic over the restaurant's ongoing food safety issues has yet to abate.

Predictably, Van Lustbader has been the target of attacks by egg avatars and others accusing him of purposefully shorting Chipotle's stock, a claim Van Lustbader denies. Financial faith in the company has been trending downward since the outbreak was first reported, even though restaurants were declared safe after closing all of their locations and retraining employees. 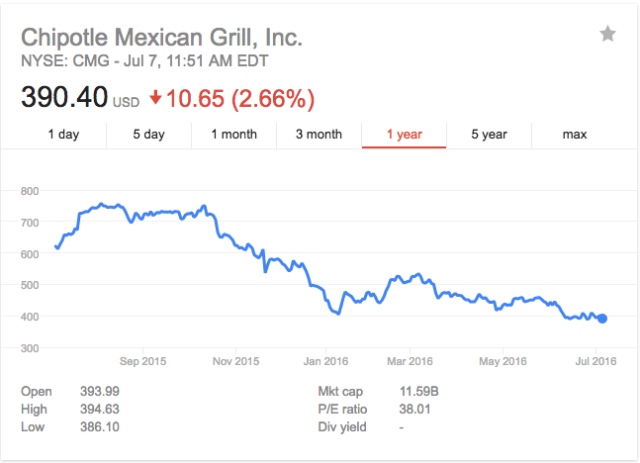 At least one other person claims they contracted some kind of illness from a Manhattan Chipotle, but a spokesperson told Business Insider the company had "not heard any reports of illness associated with any of our restaurants." At press time, a Health Department spokesperson said they would look into whether an investigation was underway.

It's been a seriously atrocious year for the once-respected—and feared—company. During the height of the E. coli scandal, Chipotle executives, including ex-CEO and founder Steve Ellis, were accused of insider trading while their company was floundering. Then, executive Mark Crumpacker was named as an alleged buyer in a bust of a cocaine ring, from which he was said to have purchased cocaine during the height of the scandal.