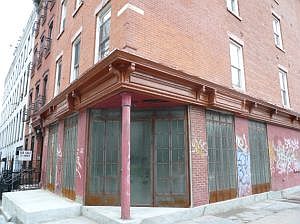 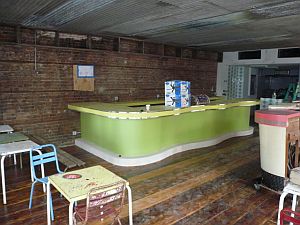 It’s now trendy for tourists visiting Rio de Janeiro to eschew the nice hotels in favor of a full immersion in the city’s sprawling shantytowns, or “favelas”. But for those who can’t make the trip to Brazil, a new restaurant will soon bring a taste of that scene to Williamsburg. Called Favela, the establishment is described as a "Brazilian Botequim", a simple place for the neighborhood to gather for drinks, food and watching soccer. (Favela’s business card has Pelé on the back.)

Owner Jeremie Carrier, a manager at Soho’s French bistro Felix, hopes to open as soon as next month, though it’s clear from the photo here there’s still a lot of work to do. (Um, is that ceiling going to hold those fans?) He tells us Favela will be as much a bar as a restaurant, with all South American spirits, DJs, live music and a chef from Brazil. Located in a former thrift shop, the place seems like it could be a nice complement to Bembe, the sometimes packed Brazilian hotspot around the corner.