New $176 Cocktail Also Comes With Free Ride In A Maserati

At first we were a bit taken aback by the price tag on this new cocktail on the menu at the hotel bar in the Langham Place hotel on Fifth Avenue. Call us tightwads, but $176 does seem a tad steep for a cocktail, even taking into account that it's made with four high-end beverages: Aperol, Amaro Nonino, Plymouth Gin, stirred and strained into a flute of Krug Champagne.

To be honest, $150 is usually as much as we're prepared to spend on a cocktail that doesn't come with a Luxardo cherry coated in edible gold and a floater of tears harvested from struggling 40-year-old screenwriters living with three roommates in Ridgewood. But this $176 cocktail, called the Quattroporte, comes with something sweeter than locally-sourced tears—a ride in a motor vehicle! That's right, it's got an internal combustion engine and everything!

The vehicle, called a Maserati Quattroporte, is capable of driving 176 mph, hence the cocktail's price point. After you're done knocking back the Quattroportes in the hotel's Measure lounge, they'll drive you anywhere in Manhattan in a Quattroporte. And given the NYPD's lax enforcement of speed limits in NYC, there's no reason why you shouldn't ask the driver to floor it up to 176 mph to get your money's worth. If you're feeling extra-decadent, light another wad of $176 cash on fire and hold it out the window as you're speeding up the FDR!

The Quattroporte experience must be ordered 24 hours in advance, and is only available for the month of November. A representative of the hotel tells us they haven't sold any yet, so you could be the first to experience the most sybaritic publicity stunt of the month (so far!). 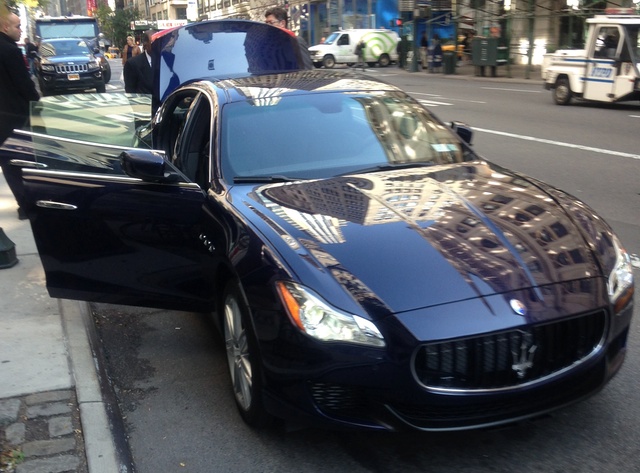 #cocktails
#Langham Place
#maserati
#publicity stunts
#the measure
Do you know the scoop? Comment below or Send us a Tip