Neir's Tavern, NYC's Oldest Bar That You've Never Been To A few years ago I lived in Ridgewood, Queens, which at the time didn't have any craft cocktails lounges. So I looked into the best old bars I could go to that were nearby, and one of those was Neir's Tavern, which was just about a 10 minute drive through the Cemetery Belt.

It had many appealing qualities, mostly due to its age (it opened in 1829, under the name the Old Blue Pump House, making it over 180!): It's where Mae West (now buried in one of those nearby cemeteries) first performed, though that has been disputed. There was an old bowling alley inside. And a scene from Goodfellas was shot there.

Recently, old Neir's got back into the headlines when borough historian Richard Hourahan called it the oldest bar in the city... a title that Manhattan's McSorley's likes to wear. Neir's was around for three whole decades before McSorley's even had a foundation, but McSorley's technically claims to be the "oldest continuously operating bar." Anyway, everyone's a winner! Especially those who like to toss back a pint in a place with some history. 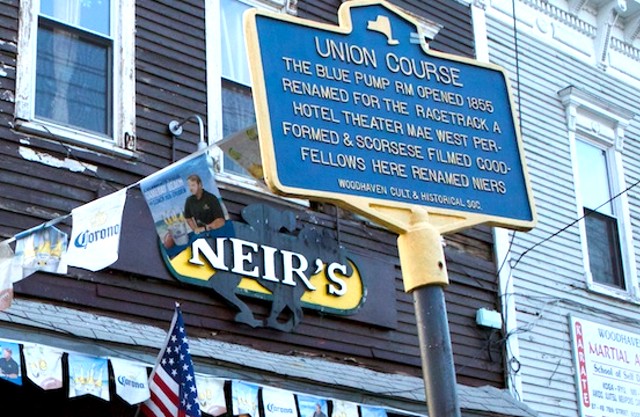 Firefighter Loycent Gordon is the newest owner of Neir's, and did some refurbishing after taking over the taps in 2009. His #1 goal is to keep the place open for another 180 years, at least.

When it was The Blue Pump Room, it was owned Cadwallader R. Colden, the manager of the famed Union Course Race Track. Around 1835 ownership changed and it was called The Old Abbey, until 1898 when Louis Neir took over—he even operated the bar as a speakeasy during prohibition.

It was Neir who added a ballroom, a bowling alley, and a hotel upstairs, renaming the place Neir's Social Hall—the old sign is still in the bar. This pretty much lasted through 1967, when new ownership came in and named the place: the Union Course Tavern. Flash forward to 2009, and that's when current owner Loycent took over, bringing back the Neir's name—he spent 8 months refurbishing the place.

Yesterday Loycent told us the ballroom and the bowling alley are no long around—the swinging doors you'll see in these photos were the doors that would lead to the alley, where neighborhood kids would make money by lining up the pins. While the original bowling alley flooring was never removed, it was built over. Now the old alley is storage closet, and the ballroom is used as a recording studio by a metal band.

Thinking of heading over? After spending some time there yesterday, photographer Sai Mokhtari noted, "Everyone at the bar was super friendly and open. All regulars. Very familial. All very welcoming. Everyone was a part of the conversation. This is the kind of bar you WISH still existed...well, turns out it does."

Neir's Tavern is located at 87-48 78th Street in Woodhaven, Queens

#history
#loycent gordon
#neir's tavern
#oldest bar
#queens
#woodhaven
#original
Do you know the scoop? Comment below or Send us a Tip