Must Have Dish: Cheesy Egg-In-The-Window At The Commodore

The food at Williamsburg faux-dive The Commodore has always been better than the average pub grub, like their crunchy fried chicken thighs and a spectacular cheeseburger. They excel at taking something simple and elevating it just enough to make it more interesting without losing the heart of the original. Their version of grilled cheese really nails that, using sharp and tangy pimento cheese in lieu of a flaccid slice or two of American. Now, with their recently launched weekend brunch, they've somehow improved upon that recipe, combining the Adult Cheese sandwich with an egg to make their Egg in the Window.

For those unfamiliar, you make an Egg in the Window—also known as Egg-In-A-Hole, Toad In A Hole—by cutting a hole in a piece of thick, buttered bread, putting the bread into a pan, then dropping a whole egg into the center and griddling until the egg is over easy. At Commodore, they take this simple breakfast treat to another level with the gooey grilled cheese sandwich standing in for the humble slice of toast.

The gut-buster comes with a pour of salsa roja, which adds some smokey heat to the plate. We could have used a bit more spice, but the bar's supply of Cholula hot sauce easily takes care of that. Use the adorable grilled cheese cut-out to sop up some of the egg yolk, which oozes lasciviously from the center of the sandwich when cut. The dish'll set you back $10 but you definitely won't be hungry again until at least suppertime. 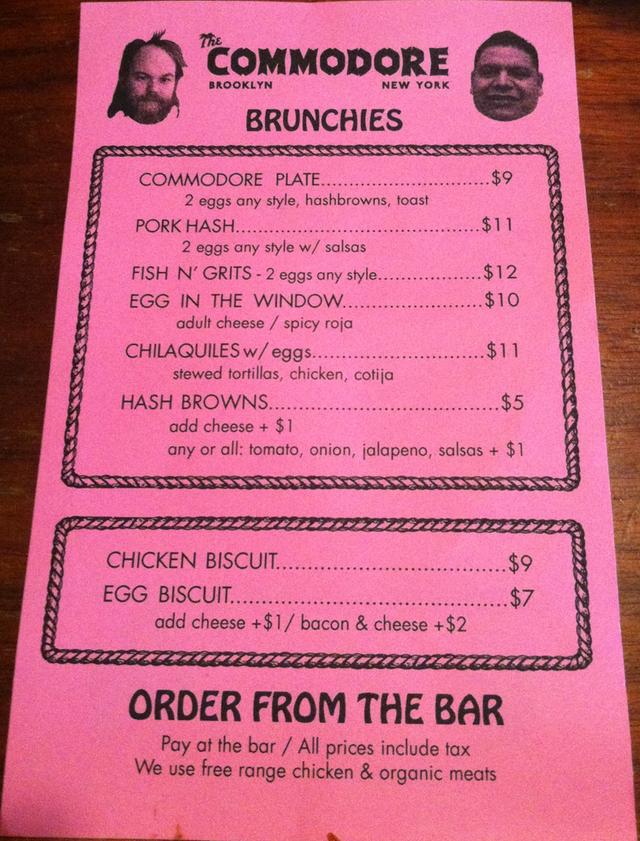 #brunch
#commodore
#egg in a hole
#grilled cheese
#must have dish
#williamsburg
#original
Do you know the scoop? Comment below or Send us a Tip
A new Gothamist is coming! We’ve moved comments over to our beta site. Click here to join the conversation and get a preview of our new website.