New York-based writer Meghan Keneally has been obsessed with the off-the-menu Grand Marnier Shrimp at Chin Chin for most of her life. Here's why:

For many families, food memories center on a grandmother’s famous lasagna or secret sponge cake. Instead, my Irish Catholic clan counts Chin Chin’s Grand Marnier shrimp — dreamed up by someone else’s long-dead Chinese grandmother — as one of the foods we call our own. The dish entered our family repertoire when Chin Chin opened in 1987, just a few months before I was born. My father worked in one of the nearby banks, and my parents started taking me to the place shortly after that. You could say the restaurant and I grew up together: Chin Chin celebrated its 25th anniversary in July, and I just hit the quarter-century mark, the intervening years punctuated by many, many meals in those elegant surroundings.

Back to the shrimp: Each of the giant crustaceans has a light, crispy coating, and arrives drenched in a creamy sauce oozing of the Grand Marnier-mayo-and-egg-white mix that serves as a marinade. Don’t let the mayo fool you, for this is far from a simple shrimp salad. Every aspect of the dish—from the enormity of the giant shrimp to the multiple layers of texture found in each bite—shows that a great deal of culinary care went into its preparation. These intense specimens come nine to a plate, and are so rich that no one person could possibly get through more than half an order. If you aren’t salivating yet, take the word of former New York Times food critic Sam Sifton who called the Grand Marnier shrimp “delicious beyond compare” in his review, or the Zagat listing which deems the dish a “can’t-resist.” 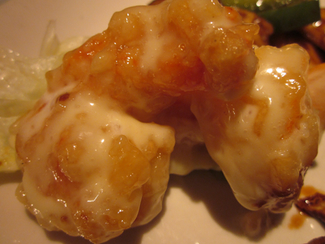 It’s decadent by anyone’s definition, and I still fear the calorie count. But whenever I eat the dish, I feel more than just the inevitable food coma. I’m reminded of how my cousins were in awe of my 6-year-old self as I threw the shrimp back like popcorn and I’m reminded of our recent pattern on Christmas that finds our family in the restaurant filled with New Yorkers observing the Jewish tradition of eating Chinese food on the biggest of Christian holidays.

Family traditions are a theme at Chin Chin. The self-described “haute Chinois” restaurant was founded by Jimmy Chin, 63, and his brother Wally, 66, on East 49th Street during the eighties’s Asian restaurant boom. The Chins had immigrated to New York from China’s Canton province when Jimmy was only 5 years old, and their heritage is displayed in the form of sepia family portraits lining the immaculate dining room walls. The picture on every menu cover shows Jimmy standing next to his mother, with young Wally on her lap, shortly before they made the trip to America. And the kitchen is just as familial, with the top four positions held by direct relatives including brother-in-law-turned-head chef Chin Kuen Hin.

“If you can work together it’s a huge plus, because it’s a high-pressure environment," Jimmy says. "[But] if you say something bad in the heat of working together, and someone gets upset, you lose a relative, not only an employee."

Two years ago, when Wally decided to leave and start his own restaurant (the now-defunct Walle), it was a matter of coming out from under Jimmy’s shadow. “Everybody has to go and take their swings,” Jimmy reflects. Unfortunately the restaurant didn’t even last a year, which is not uncommon in this post-recession era. While Chin Chin’s glass doors remain open, corporate cutbacks and a certain infamous Ponzi scheme have affected business.

"The one that hurt the most was Bernie Madoff—he worked right down the street in the Lipstick Building — and basically every day, 110, 120 people in his office would have lunch. They’d do big parties. All of that ended,” Jimmy observes. 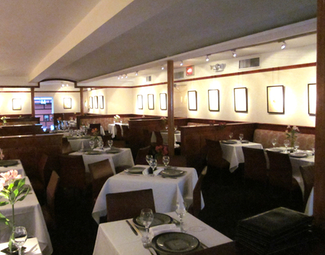 The challenges facing Chin Chin stemmed from changing attitudes and changing appetites. Opulent restaurants that used to rule the city during the days when Wall Street reigned supreme were stuck with many empty tables when the recession hit. “Fine dining has changed dramatically,” said Angie Berry, the chef de cuisine at the Mandarin Oriental’s Asiate. “What used to be over-the-top and lavish became poor taste during the recession and because of this, diners now want more for their money.”

A steady stream of regulars, who valued the comfort of Chin Chin’s familiar food and Jimmy’s jovial welcome at the door, helped keep Chin Chin afloat. Former New York Magazine restaurant critic Gael Greene says that while reaching the quarter-century milestone in “the quicksand of New York restaurants is remarkable,” she credits their success more heavily to the friendly staff, as opposed to their unchanging menu.

“Chin Chin survives because older New Yorkers loved it when the kitchen was more reliable and now love it for old time's sake, and because of their fondness for Jimmy Chin,” she said. “There are so few upscale Chinese restaurants left with captains in tuxedos bowing and portioning your food...where the owner knows your name.” While Ms Greene rightly points out that it seems the menu “is seemingly sealed in amber,” Jimmy has made some additions as diner’s tastebuds have become more adventurous. Gone are the days when, as Jimmy recalls, “it used to be only chicken chow mien, egg rolls and spare ribs.”

In contrast to increasingly available regional fare, Chin Chin always focused on American dishes created with Chinese flavor. That said, Jimmy has added various “foodie” items to the menu in recent years, including the thousand-year egg, a duck egg buried in a dirt-filled ceramic pot for up to a year to mimic the way the Chinese used to store eggs underground before refrigeration was available.

However, one food that will never make the printed list is the Grand Marnier shrimp, currently $28.50. “I’ve always had it as a special, because if it’s on the menu then it isn’t special anymore,” Jimmy tells me. “It’s one of those things like the Statue of Liberty: You come to New York, you go to the Statue of Liberty. You come to Chin Chin, you get the Grand Marnier shrimp.” My family certainly agrees.

#chin chin
#must have
#must have dish
#shrimp
#original
Do you know the scoop? Comment below or Send us a Tip