Our latest installment of Quick Bites brings us to Bleecker for some of the best mac & cheese in town.

THE VIBE
When Murray's does anything new, especially if, as is invariably the case, it involves cheese, it's always a good idea to pay attention. Opened in 1940 on Bleecker Street by Murray Greenberg, the shop has expanded and evolved over the decades into a true NYC institution, and is today one of the premiere speciality food stores in the country. No question Murray's sells some outrageously expensive stuff—$45 a pound is not an unusual sight—but the mongers behind the delightfully chaotic counter really know their cheese, and many times over the years they've helped me get a large variety of exceptional items on a limited budget.

In 2012 Murray's entered the sit-down restaurant business, with Murray's Cheese Bar serving a lactose-heavy menu of dishes just a few doors down from the mothership. Then this past weekend came the grand opening of the team's latest venture, Murray's Mac & Cheese, a counter-service spot taking over the corner of Bleecker and Leroy. Although it seems like a sure-fire winner—the city's great cheese-seller makes the world's most popular cheese dish—Murray's seems to be hedging its bets a bit, and is only committed to a four-month pop-up lease on the space. Hence the awkward "for rent" sign still hanging out front.

For now, however, let's revel a bit in our Mac & Cheese bonanza, and hope that the arrangement shifts into something more permanent. The restaurant itself feels fully finished, with seating for about twenty at the stylish tables and white padded stools looking out at Bleecker Street's never-ending parade. Charming line drawings of cheese and radiatori provide the only decor, and overall the place has a pleasant, clean design to it. 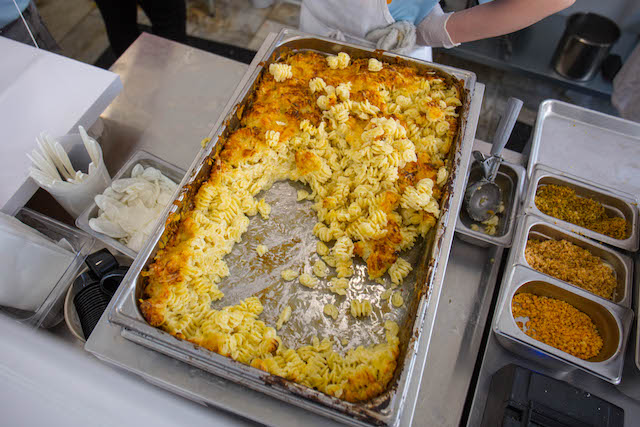 THE BITES
The menu at Murray's Mac & Cheese employs the now-familiar build-a-bowl model of ordering. Your meal starts with a scoop or three of baked Classic Mac from the big, constantly replenished tray by the register and, if you want, you can choose from more than 30 different meats, cheeses, veggies, sauces, and toppings available to pile on. Crucially, there is only one type of pasta on offer, the previously mentioned radiatori, which is made here by Sfoglini and chosen by Murray's because it "maximizes surface area" for all that melted cheese. The able staffers quickly heat everything up in a cast iron pan and your name is called for pick-up in just a few minutes.

The most important thing to know here is that foundational Classic Mac is terrific, with perfect, chewy texture in the pasta, and the "secret blend of cheeses" hitting the right balance of familiar, funky goodness. If you want to amp up the decadence, the smart move is to simply plop a ball of burrata on top, pierce the mozzarella skin with your plastic fork, and let the cool, creamy stracciatella ooze into the mix. I also added some excellent Nueske's bacon to the proceedings here, and was very glad I did.

If you don't feel like making more than one decision, there are five preset combos spelled out on the big board above the counter, all but one of which I ate over the weekend (they were out the Breakfast Mac by late afternoon on Saturday), and all of which I would gladly order again. In general order of preference there was the Carbonara, with its fontina, mozzarella, pancetta, and peas; the BBQ, highlighted by chicken, pepper jack, and bits of peppadew; the Buffalo Chicken, which was unapologetically rich and spicy; and the French Onion with gruyere and bacon, which definitely had some bite. Everything comes in four sizes, from Snack (8 ounces) to Family (24 oz).

There's also a soup of the day, and a salad if you want, but Murray's Mac & Cheese mostly just does the thing it promises, and does it very well. (Note to those who are gluten-free: they recently added a gluten-free mac & cheese to the menu, too.)

THE VERDICT
Perfect for when a cheese and/or comfort-craving strikes—and really, when doesn't it—or you need something quick before a movie at the IFC, Murray's Mac & Cheese is a nice addition to this busy stretch of Bleecker. 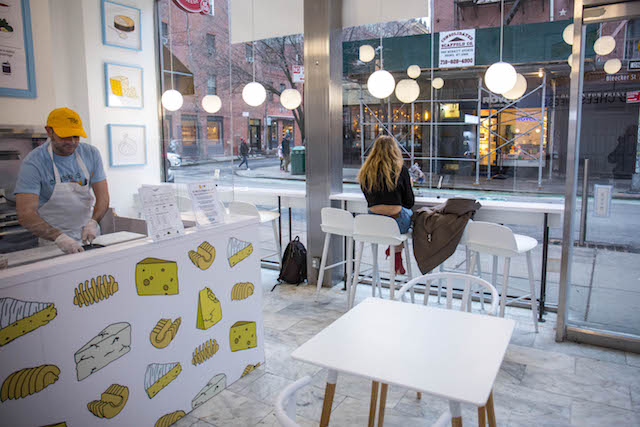 Murray's Mac & Cheese is located at 254 Bleecker Street, at the corner of Leroy Street, and is open daily from 11 a.m. to 8 p.m. (murraysmac)