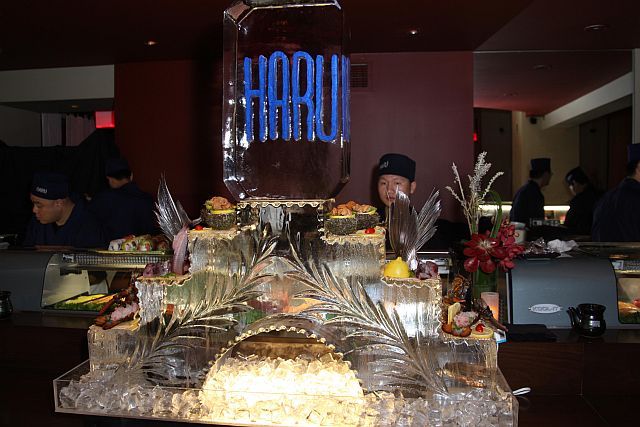 As Gothamist recently noted, New Year's and the following week or so are a particularly festive occasion for the Japanese. Which is no doubt why Haru decided to celebrate the grand opening of its newest location on Wall Street last Wednesday. Hordes of sushi-crazed suits crowded the restaurant located in the historic Beaver Building for the gala event, which was also a benefit for the Downtown Alliance.

Although the sushi bar teemed with platters of tuna and and yellowtail, our favorite was the impeccably clean-tasting uni, perched atop an ice sculpture at the center of the sushi bar. Standouts among the hot food - passed by Haru staff made up to look like geishas - were the rock shrimp tempura and sea bass kebabs. There were plenty of Haru’s signature cocktails, including the bright blue Komodo Dragon made from vanilla vodka, coconut rum, pineapple juice and blue curacao.

Gothamist decided to forgo such oddly colored potent libations, especially when we noticed that one of our favorite sakes Kaori, a fruity junmai ginjo, was being offered. We must also sheepishly admit that after seeing scads of people clutching jade-green bottles with images of Buddha, we tried a bottle of Lucky beer, an unappealing Australian brew that we will not be sipping again anytime soon. 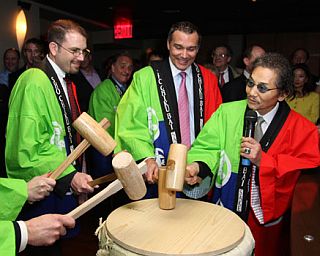 Rocky "Mr. Benihana" Aoki, founder of Haru's parent company, was on hand to make the party even more festive by leading a traditional kagami biraki, a breaking open of a sake barrel with wooden hammers that typically occurs on January 11 and is meant to bring luck in the new year. As he stood with Benihana's president and CFO, Aoki said "Do want to practice first? Okay, remember don't hit." When the laughter subsided Aoki and company cracked open the barrel of Sho Chiku Bai sake with a hearty thwack. Soon wooden masus were being poured for the revelers gathered on Haru's second floor. When Gothamist remarked that the masu tasted remarkably of cedar, one of the managers quipped, "They're brand new, just from the forest."