When Smorgasburg returns to the great outdoors next weekend, it'll bring with it a slew of new food vendors ready to take on the crowds in East River State Park and Brooklyn Bridge Park at Pier 5. Each year the popular market brings in new talent to supplement stalwarts like Milk Truck, Dough doughnuts and Mighty Quinn's. So who's poised to be this year's Ramen Burger? Let's dig in.

Of the 21 newbie vendors, there are a few standouts ripe for Instagram fodder. First up, the mozzarella "bombs" from Big Mozz: fresh mozzarella—made on-site—injected with pestos and other savory sauces like amped up burrata. A variety of Scotch egg interpretations from The Imperial Egg sound fun, like the Japanese-style chicken sauce wrapped around a boiled egg and served with sweet soy aioli. And we're likely to see quite a few folks gnawing on duck legs on the bone, cooked confit-style in their own fat by the folks at Duck Season. 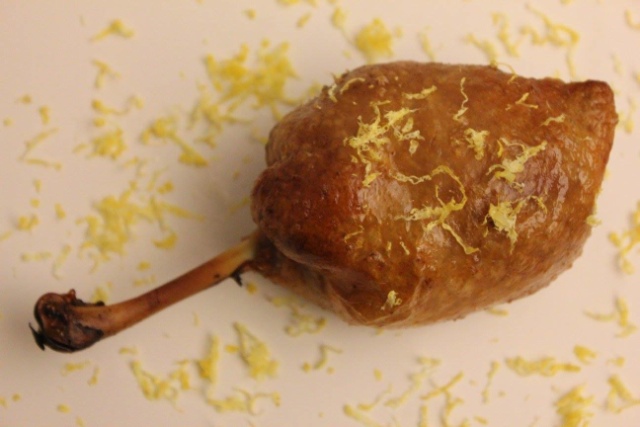 It's not all industry rookies this year, as Williamsburg local Antica Pesa expands their reach past Berry Street with a mobile version of their gourmet Italian fare. Likewise, LES newcomer Birds & Bubbles will debut a Nashville hot chicken sandwich at the market, an item not available at the restaurant proper. And then there's social justice-oriented food truck Snowday, who are whipping up even more excellent maple-themed goodies this year. Indian-style tacos made from paratha courtesy of Goa-Taco will also be on-site.

But of all the newcomers, the unique von Kava offering from Mas Farmhouse's Jonathan Kava is positioned to be the one with the biggest foodiot draw. Instead of grab-and-go like the traditional setup, this booth features a sit-down tasting menu lasting for 15-minutes, during which diners are served a multi-course meal for between $9-$13. The menu's likely to change throughout the season, but expect dishes like white asparagus soup with charred ramps to start, followed by poached cod with pickled fiddlehead ferns and smoked shiitake mushrooms, and finally a caramel petit four to finish.

Check out the complete lineup below and start organizing your game plan for April 4th, 5th and beyond.

#brooklyn flea
#new vendors
#smorgasburg
#original
Do you know the scoop? Comment below or Send us a Tip