Move Over Bocce... Why Aren't There Any Real Shuffleboard Bars In NYC?

A few weeks ago we were thinking about doing a piece on bars that we wish existed in New York City, because if our years of art classes taught us anything, it was about the importance of understanding "negative space." Or something. The problem is we got stuck on THE DREAM: bringing shuffleboard into the New York City outdoor bar scene. And not that fake table shuffleboard like they have at Lucky Dog, we're talking about the real deal, the kind your grandparents play in Florida.

Sure, bocce has had a good run in the city's bars (thanks in part to Floyd and Union Hall) and parks (as just written up by the NY Times), but by now it's getting a little played out.

For a while it looked liked like croquet was going to make a comeback (was everyone watching Heathers?) but the logistics of space got in the way, making it strictly refined to larger spaces found in parks. But what about shuffleboard, you guys? You can fit it nicely into the backyard of a bar or in a park. Plus, it would help burst that Boca trend that's been bubbling beneath the surface for years.

But that's not all—the game has a long history of being played in New York City. According to lore, it started to get big here in the late 1800s, when shuffleboard was found in "wealthy homes of New York City" (albeit, sometimes the table game). It really gained momentum after World War II, and eventually Hollywood hopped on the bandwagon. According to the history of the game, "when the pin-up girls and bandleaders and actors discovered they really liked the game, shuffleboards found their way into the studios and homes of the stars. People like Betty Grable, Harry James, Merv Griffin, Alan Ladd; all had their own shuffleboards."

And now, some visual proof that New Yorkers had respect for the game—here's one photo from LIFE magazine showing men playing shuffleboard at the Parkchester housing development in the Bronx, circa 1942: 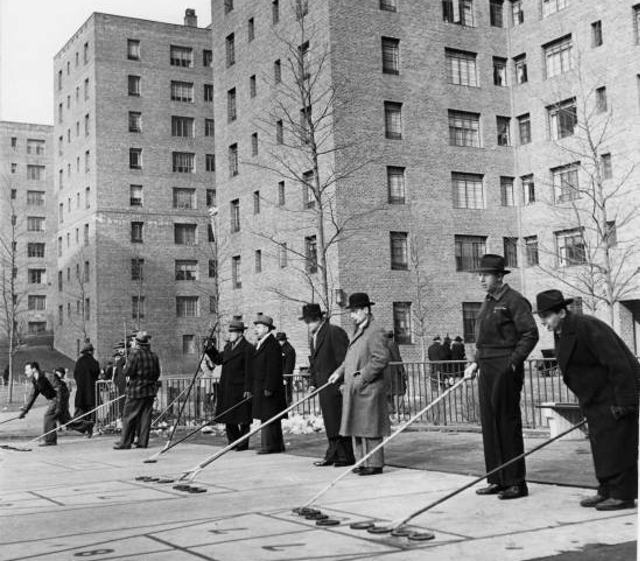 Shuffleboard in the Bronx (via LIFE)

Even the WPA pools were adapted during off-season to house shuffleboard games. Check out the Highbridge Pool: 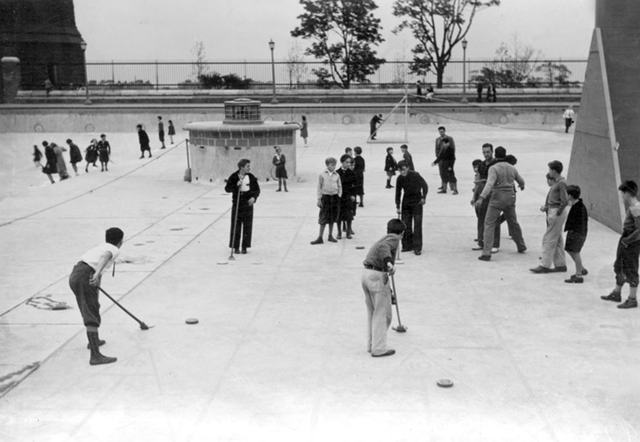 UPDATE: Rumor has it in the comments section that the new beer garden in Bed-Stuy, the Brooklyn Tap House, has shuffleboard in their backyard. We're on our way to confirm!

#bars
#real shuffleboard
#shuffleboard
Do you know the scoop? Comment below or Send us a Tip