Even the most experienced chefs and eaters have been defeated by Nashville Hot Chicken, the super spicy fried chicken that's a specialty of the state. Even eat-anything-man Anthony Bourdain is said to be terrified of the stuff. A pilgrimage to the south is a must for any heat seeker's bucket list, but New Yorkers can now tide themselves over without leaving the five boroughs at Carla Hall's Southern Kitchen, which is now frying up spicy birds in Brooklyn.

You'd probably recognize Carla Hall from one of her many television appearances, notably as co-host of ABC's The Chew and as a competitor on two seasons of Bravo's Top Chef. Her ebullient personality is tailor-made for TV, especially the daytime circuit, but the UWS dweller and Nashville native isn't keeping her cooking strictly on air, with a kiosk in the Barclays Center and now her new restaurant in the Columbia Street Waterfront District.

AvroKO, a hip design crew that's made their mark with spots like Genuine Liquorette and food hall Gotham West Market, have transformed the cave-like interior of the former Whiskey Soda Lounge space into a cheerful spot that looks like granny's kitchen mixed with a diner. There's also a "general store"-type element, selling Nashville-born products like The Nashville Jam Company and Olive & Sinclair Chocolate Co., among other seasonal items and new products. 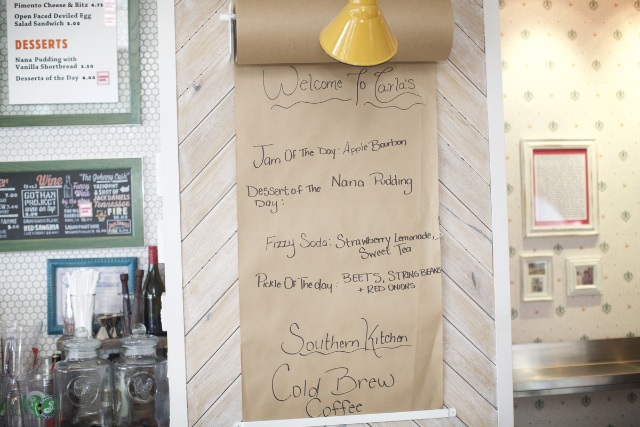 But traveling to the Cat King of Columbia Street's turf means you're there for one thing: to get your taste buds burned off by Hall's spicy fried chicken. The journey starts by selecting either a single cut—wings, thighs or tenders, etc.—or one of the restaurant's Plates, which include two sides and one bread, or a big Family Meal. From there, contemplate your misery level for the moment and tomorrow. You can elect for no sauce ("Southern") if you are a baby; Hall's signature "Hootie Hoot," if you can take some heat; or "Boomshakalaka" if you're content having your tongue melt off.

Sides span the usual crew, with options like baked mac n' cheese, candied yams, cole slaw and potato salad. Breads come in corn, white pullman loaf, sweet potato roll and buttermilk biscuit form, with the option to add on jam and butter on the side. Finally, some other sides and vegetarian options including a Deviled Egg Sandwich and a Creekwood Gardens chopped salad with white BBQ dressing.