Mountain Province In Williamsburg Is More Than Just A Coffee Shop

"We set out to be a small neighborhood staple, and I think we have achieved that," Mountain Province owner Ray Luna says of his coffee shop on Meserole Street in East Williamsburg. "We're the gay POC 'Cheers' of coffee shops, and we hope that we will continue to have a home in this block amidst the rabid gentrification of Brooklyn."

There are a few things that make this space unique. The beans used to make the espresso drinks are sourced exclusively from the Philippines and the cafe specializes in Filipino pastries. The intimate interior, decorated with palm tree-patterned wallpaper, the cabinets filled with old pots and vintage photographs, and even a shrine dedicated to the Infant Jesus and the Virgin Mary, feel more like a Filipino grandmother's kitchen than many of the other hip coffee shops in the neighborhood.

This is no coincidence. Luna tells us that he was inspired to open the cafe three years ago by his own grandmother, the matriarch of his family. "My grandmother was able to provide and send six kids to school by baking cakes for the neighborhood. Soon after, my mom and my aunt followed in her footsteps in one form or another," Luna told us. "So in a way, our tiny shop is a celebration of her legacy and the legacy of my family" he adds.

Even the house-made pastries sold at Mountain Province are made with his grandmother's recipes. One of the most popular items on their menu is their cassava cake, made of grated yucca, coconut milk, coconut cream and topped with a layer of organic condensed milk. Their ensaymada, a brioche bun filled with ube (purple yam), is also a favorite among customers. 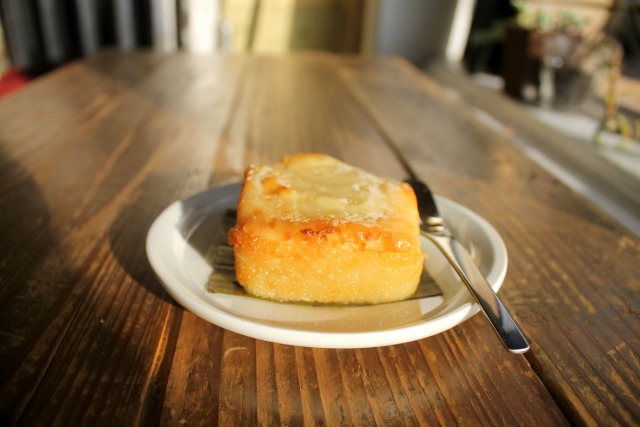 The only coffee shop in New York City that serves solely Philippine-sourced coffee beans, Mountain Province focuses on offering ethically-sourced, fair trade coffee beans provided by Kalsada Coffee, a roaster that works with small independent coffee farmers in the Philippines. Luna says he chose to do this because he "wanted to support the coffee farmers in the Philippines and to promote the Philippine coffee industry here." Mountain Province also used to serve the high profile civet ("cat poop") coffee, but had to stop because the demand for it was low due to its cost.

Luna initially wanted to open Mountain Province as a safe space for his friends, who identify as LGBTQIA+ and POC. His friends, including his partner, have subsequently joined the Mountain Province team as staff, as well as business partners. They each have their own stories of migrant struggle, since, like Luna, they emigrated to America from areas in the Philippines such as Manila, Cebu, Misamis, and Pampanga.

Chevy Evangelista, Ray's best friend—who was a dental assistant for 12 years before becoming the coffee shop's barista—told us that what sets them apart from other cafes is their customer service. "I'm figuring it out myself, whether its a Filipino thing or whatever, we're really friendly with our customers. We know most of their first names. We've gone to dinner with some of them. We're very hardworking and we get pleasure from serving food and coffee to the neighborhood."