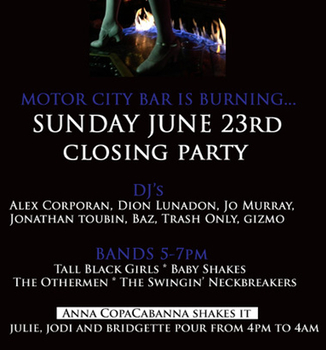 In February, everyone shed a tear as Motor City Bar announced it would be shutting down for good after nearly two decades. The Ludlow Street bar has gently led many alcohol-fueled patrons into late nights and Lower East Side sunrises, and now they've announced their official time of death: June 30th, one week after their big blowout:

"On Sunday, June 23rd, come and celebrate 17 years of sex, drugs and rock n roll with some of the best people you'd ever care to meet. Come and give a long kiss goodbye to the amazing owners, bartenders, dancers, DJs, Detroit memorabilia, and those infamous bathrooms! A big thank you to all those who have lived, loved, laughed, cried, danced, yelled, fallen down, met future partners, found jobs, been inspired, or just generally had a great time in this wonderful establishment these past two decades. To say it will be sorely missed would be an understatement. RIP."

While the big goodbye takes place on the 23rd, they aren't handing over the keys until June 30th, and the bar will remain open until midnight of that date—go and pay your respects to MCB, and the rest of the LES.

#closing
#LES
#motor city bar
#rip les
Do you know the scoop? Comment below or Send us a Tip