Our latest installment of Quick Bites brings us to LIC for some BBQ.

THE VIBE
The owner and chef/pitmaster of this brand new Long Island City Texas barbecue spot is Josh Bowen, who first became known around these parts for his other LIC barbecue restaurant, the more Kansas City-style (and quite good) John Brown's Smokehouse. And more recently, he has been known as the guy who went ballistic when Amazon pulled out of Queens.

Mothership Meat Company is located on the other side of the Queensboro Plaza tracks from all the massive development along Jackson Avenue, but since there still isn't much in the way of restaurants or retail along that strange corridor, I imagine many of the luxury renters will make the trek up to 40th Avenue. Especially once the weather warms up for good, and they see Mothership's huge back yard, currently operating at only a tiny percentage of its capacity.

In addition to the expansive outdoor patio, Mothership has seating for about 50 inside, at several long communal tables and before a cozy bar. You order at the counter—meat is generally sold by the pound, with a half dozen or so sides and add-ons available as well—then carry your presumably laden tray to the spot of your choosing. Bright, cartoony murals by Shiro cover almost every available surface—it definitely feels like a fun, comfortable place to hang out, stuff your face, and drink a bunch of beers.

THE BITES
Unlike the sweeter, saucier barbecue Bowen serves at John Brown's, the meat at Mothership is simply seasoned, mostly just salt and pepper, with much of the added flavor courtesy of an "enormous" oak-fired smoker in the back, which burns through cords of the stuff. That said, Bowen, who's from Kansas originally and used to work the pit at the Central-Texas-loving Hill Country, isn't wedded to any single regional style. "This is New York City," he said "We can do whatever we want!"

Here's what you really need to know, though: over the course of two meals this past weekend I ate through almost the entire Mothership menu, and nearly all of it is extremely good. There are tender Pork Spare Ribs hacked to order, and a lovely, fatty Brisket (request the end if you can). The lively Mothership Sausage bursts with juices and pairs nicely with a big chunk of bright yellow American cheese. The Chicken is just okay, certainly moist enough if a bit bland, but the Beef Shoulder, served pinkish, is a first-rate slab of cow. And the surprise winner? The wonderful thick slices of House Ham, served with proper amounts of caramelized skin.

The side dishes are all overachieving versions of BBQ classics, including a super creamy Mac & Cheese and a Pork & Bean stew thick with smokey meat. Definitely get the Texas Caviar, a crisp and zingy mix of peppers, corn, black beans, onions, and parsley, and the German Potato Salad, studded with caraway. Sauce all comes separately, and the vinegary "hot" one is an obvious complement to just about everything, but the best of the three is a remarkable mustard concoction that adds tang, a bit of sweet, and a surprising amount of heat. Other items you can, and should, put on your tray include sauerkraut (especially good with the ham), the previously mentioned hunk of neon cheese, and a boat of pickles.

THE VERDICT
Given Bowen's recent distractions, it's kind of a miracle how successful Mothership Meat Company is at putting skillfully, lovingly prepared food on your sheets of brown butcher paper. He told me he's been working 14-hour days getting this thing right, and the effort has paid off. Plus the space is built for a good time. Locals will love it, but barbecue fiends from all over town should get a crew together and make the trip to check it out. 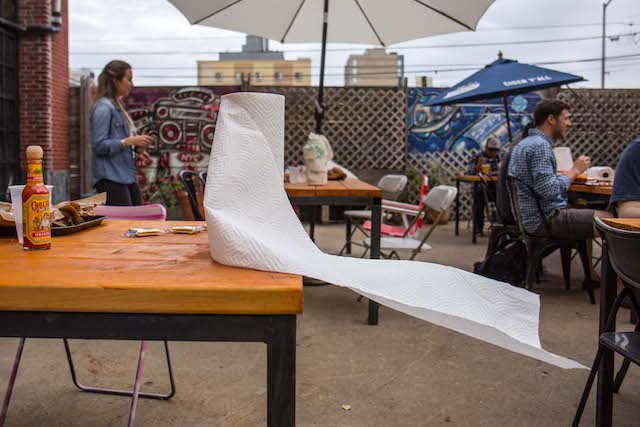 Mothership Meat Company is located at 27-20 40th Avenue, at the the corner of 28th Street and is currently open on Thursday and Friday from 5 p.m. to midnight, and on Saturday and Sunday from noon to midnight, though those days should expand soon.