Mother of All Truffles Tours NYC in Search of $$$ 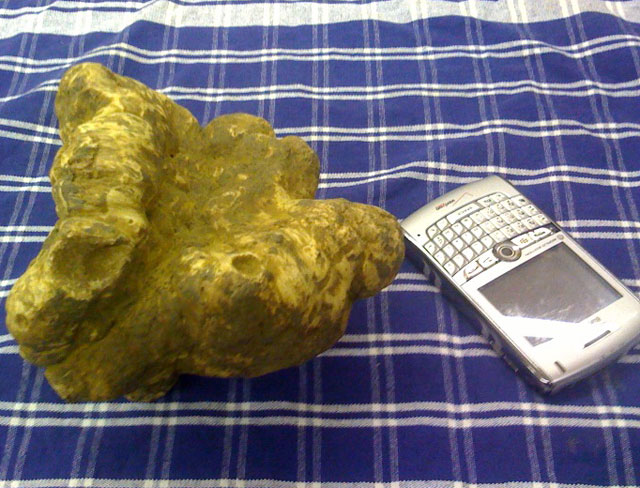 You'll recall how excited everyone was—EVERYONE—last October when Le Cirque owner Sirio Maccioni bought a "perfectly round, pristine" 1.1 pound white truffle for $7,000. Child's play! Behold the 2.15 lbs white truffle that has just arrived on our shores from Alba, Italy. It's been acquired by Mikuni Wild Harvest, whose representative Tyler Gray writes:

A very excited Italian gentleman named Francesco the Forager stumbled / sprinted out of the forest mid afternoon in a haze of deliria and joy, grasping tightly to his most precious find ever...a 2LB WHITE ALBA TRUFFLE....2.15 lbs to be exact & by far the largest White Truffle to land in the USA in the last 3 years.

Francesco said that he has never ever found a truffle by this tree before, but he could smell it under ground & so he thought it might be big….he was very pleasantly surprised....I think my hands might be shaking too if I were to stumble across this rare treasure.

Now Gray is escorting the gigantic tuber on a whirlwind tour of New York City, and has received an offer of $11,000 from an unnamed New York restaurant. A truffle of this size could yield shavings for at least 140 dishes. A fierce bidding war has broken out, and Gray tells us that "it just left Daniel, on its way to Masa & Nello, then over to Gilt…I’ll let you know what happens." Sorry to send you off on your weekend with such a cliffhanger, but check back Monday to see what kitchen this freak of nature ends up in!