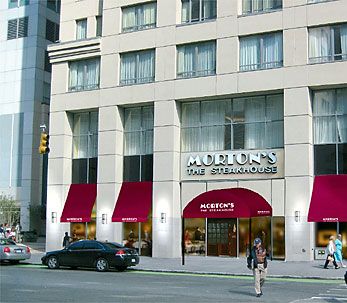 By the end of next year, downtown Brooklyn will have a new upscale steakhouse to rival Peter Luger in Williamsburg; it was recently announced that Morton’s will be occupying the ground floor of a new Marriott annex tower on Adams Street. The Chicago-based restaurant chain will dish out their beef, seafood and sandwiches in a 300 seat restaurant near the Brooklyn Bridge.

Writing for the Brooklyn Paper, Gersh Kuntzman sees Morton’s arrival as the beginning of a juicy rivalry between the two steakhouses, but their locations are neighborhoods apart in a big borough with enough meat eaters to go around. Still, there has been a bit of a backlash against Luger, a 120-year-old establishment long regarded as serving the best steak in town. Besides a perceived decline in quality at Luger, the carnivorous Kuntzman points out that Morton’s will have an edge in drawing business people with expense accounts because the chain takes credit cards, whereas “Peter Luger makes you take a J train to Marcy Avenue with $500 in your pocket.”

Luger got a 28-out-of-30 score in the last Zagat review and doesn’t seem to be sweating it. The steakhouse has the rats on the run, they just added an annex space that seats 50-60 diners, and it’s still just as hard to get a table there during prime time. Any steak eaters out there care to comment on the quality of Morton’s versus Luger?

#Adams Street
#brooklyn
#brooklyn bridge
#brooklyn paper
#chicago
#downtown Brooklyn
#gersh kuntzman
#marcy avenue
#peter luger
#steak
#The Chicago
#williamsburg
Do you know the scoop? Comment below or Send us a Tip
A new Gothamist is coming! We’ve moved comments over to our beta site. Click here to join the conversation and get a preview of our new website.