Morgenstern’s Finest is one of the top three ice cream parlors in all of New York City, scooping a consistently delicious mix of classics and straight-up weirdo flavors out of a small, brightly lit storefront on Rivington Street. Only problem is: go anytime at night, or on the weekend, or really whenever it’s even a little bit hot outside, and you’ve got yourself a line situation going on.

Well hopefully not anymore. Nick Morgenstern and his crew spent the last six months building out a huge new flagship on the corner of West Houston and LaGuardia Place (where Silver Spurs used to be; the owners of that longtime establishment gave Morgenstern their lease), and inventing a ton of new flavors to fill all those freezers. The glorious result opens today, Friday, at 4 p.m., with Nick himself up front handing out balloons.

The most important thing to know about this new Morgenstern's is that there are a jaw-dropping 88 different flavors on the menu here. Eighty eight! That includes seven varieties of vanilla (Burnt Honey Vanilla is my current favorite), seven chocolates (the Bitter Chocolate is amazing), five each of caramel (Salted Pretzel Caramel was a hit) and coffee, and 22 fruit-based scoops. A dozen sorbets, Morgenstern’s “parlor favorites” like Chocolate Oat, Black Licorice, and Green Tea Pistachio, and new crowd-pleasers such as Chocolate Chip Cookie Dough and Peanut Butter Cup round out the ridiculously lengthy offerings.

And 40 flavors in all are completely new to the flagship—Morgenstern used to be a pastry chef at places like Gramercy Tavern and Daniel, and is constantly creating and upgrading—so basically it’s going to be a fantastic winter making my through this ice cream wonderland. I mean come on, just look at these beauties! My next dozen will be Cherry Chocolate Chip, Peaches N’ Clotted Cream, Mascarpone Salted Hazelnut, French Fry, Yuzu Yamazaki, Strawberry Milk Chocolate Swirl, Toasted Almond and Date, Olive Oil Chocolate Orange, Papaya Guava, Ginger GrapeNut, Picosos Peanut Praline, and Dusty Gianduja.

But please, people, remember: don't be a sample abuser.

In addition to the whole scooping-parlor part of the operation, there’s also a 10-seat sundae counter where you tuck into Morgenstern's massive King Kong Banana Split, among other delights. Ice cream cakes, ice cream pies, ice cream sandwiches, and new “standards” like Black and White profiteroles and Pineapples Dreams are also available, as well as slices of regular cakes and pies that you can get a la mode.

Three small booths press up against the full-length windows overlooking Houston, but the big seating bonanza here is the sidewalk cafe area on LaGuardia, which can accommodate more than 30 people. The Rivington Street original will remain open as usual, by the way. This is an expansion, not a replacement. 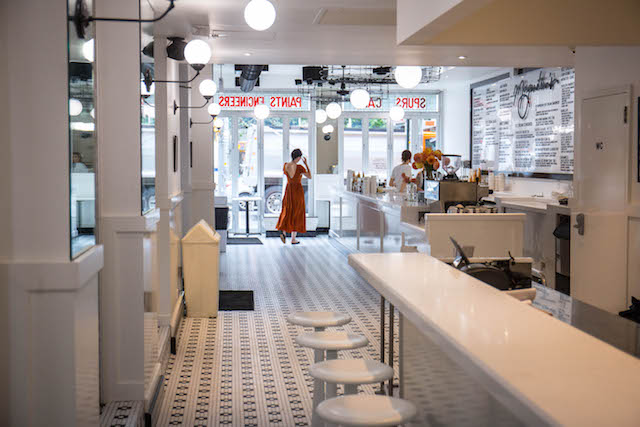 The Morgenstern's flagship is located at 88 West Houston Street at the corner of LaGuardia Place, and is open today from 4 p.m. to midnight, and from noon to midnight everyday thereafter (212-209-7684; morgensternsnyc.com)