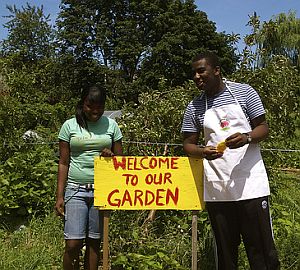 For decades, residents of low-income neighborhoods under-served by supermarket chains have been getting their hands on produce the old fashioned way: By growing it in their own gardens. In recent years, outer-borough farmers have taken urban agriculture a step further by selling their mostly organic haul at well-organized community markets.

An article in the Times Dining & Wine section notes that the trend is proving to be healthy and lucrative. Groups such as GreenThumb and other city agencies provide land, training and even seed money to people like Denniston and Marlene Wilks, who’ve turned four city-owned vacant lots in East New York into a mini agrarian empire. Now they sell about $3,000 in produce annually at a market run by community group East New York Farms.

Another example is what high school students at Red Hook's Added Value community farm have done. Last year, they sold more than $25,000 in Italian arugula, Asian greens and heirloom tomatoes. The movement has gotten so much attention that on Saturday 60 delegates from the U.N. Commission on Sustainable Development are scheduled to visit Hands and Hearts, a Bed-Stuy Farm, as well as two traditional community gardens in Brooklyn.