More Than 8 Auspicious Foods To Eat For Chinese New Year

The Lunar New Year 4711, the Year of the Snake, is this Sunday (February 10), which means it's time for many with Asian heritage and connections to greet the new year in traditional ways. Of course, the most traditional way to celebrate any Asian holiday is to eat—and everyone can join in that!

We enlisted some Chinese connections (okay, parents) for the scoop on what to feast on, and since Chinese people love superstitions almost as much as they love food, here are more than eight (why eight?) suggestions on what to order and why:

LETTUCE: The Cantonese word for lettuce sounds like "growing fortune." One traditional way to eat lettuce is to dip it into boiling water (with a little bit of oil) and then put oyster sauce on it.

SHREDDED VEGETABLE SALAD: Carrots, soybeans, black mushrooms, bamboo shoots and many other veggie options (sometimes ten) make up this dish, which can be prepared in advance and in great volume to last all 15 days of New Year celebrations. The soybeans are served whole, because their shape looks like the ruyi, the talisman symbolizing good luck (ruyi means "whatever you wish").

SHANGHAINESE-STYLE EGG ROLLS: These egg rolls have a thinner wrapping and their golden shape look like gold bars.

WHOLE CHICKEN: Whole chicken is special for celebrations, since usually chicken is diced into smaller pieces in dishes. During Chinese New Year, families are busy cooking many special foods, so chicken is usually cooked in advance, like drunken chicken or smoked chicken. 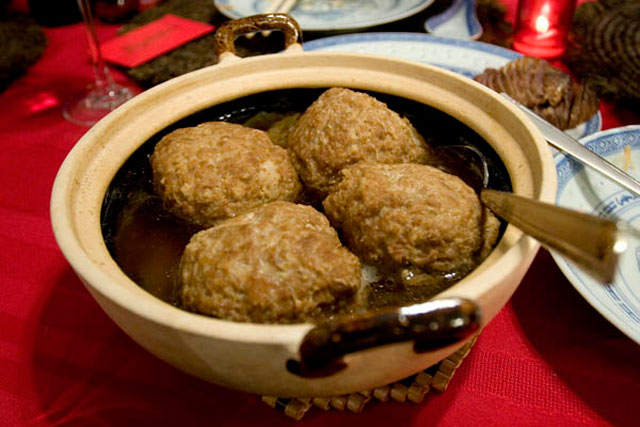 "LION'S HEAD" MEATBALLS: This dish consists of four big meatballs that are browned and then simmered in a pot of sauce and bok choy (the meatballs are the head, the bok choy is the mane). The roundness of the meatball symbolizes wholeness and togetherness of the family.

WHOLE FISH: The Chinese word for fish is yu, which sounds like the word for surplus and excess—which the Chinese take as "more fortune."

SWEET RICE CAKE: Round and sweet, niangao are popular because

ORANGES/KUMQUATS/TANGERINE/POMELOS: The word for these fruits sound like good fortune.

#chinese food
#chinese new year
#lunar new year
#symbolism
#year of the snake
#original
Do you know the scoop? Comment below or Send us a Tip