They're breaking out the champagne flutes at the Health Department this morning as the city agency celebrates five years of its letter grading program for restaurants. In a release, the DOH extolls the virtues of the program, citing a 24% drop in salmonella cases and an 18% decrease in evidence of mice in restaurants (O RLY?) as a direct correlation to letter grades. Restaurants are also reportedly performing better on inspections, with nearly 60% earning an A grade on their initial inspection. 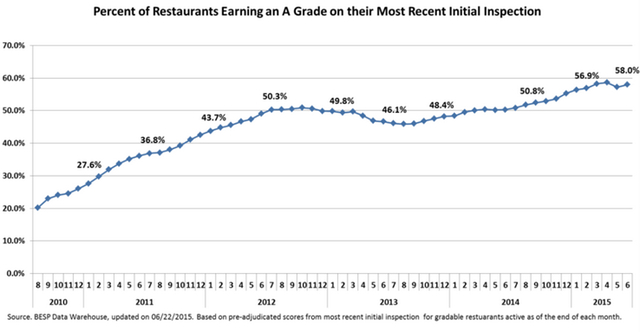 A decrease in violations is on trend for city restaurants, many of which struggled with the complex inspection guidelines and onerous appeals system. Also on the decline: the fines associated with inspections and violations. "The more than 24,000 restaurants paid a total of $26.8 million in penalties to date in Fiscal Year 2015, an 18 percent decline over the same period last year," according to the DOH, with an 82% reduction in this fiscal year over the last. In 2013, the DOH agreed to lower restaurant fines.

While the DOH may be patting itself on the back, others say the grading system still needs improvement. "We believe the fines and certain violations and the amount of points that calculate the letter grades could be reduced for non-imminent health hazards," says New York City Hospitality Alliance executive director Andrew Rigie. "As well as just a more collaborative approach, where the emphasis is on education and training versus issuing fines or letter grades that negatively hurt a business. Again, no one's trying to hide violations or not be transparent, but there needs to be a fair and equitable system that ensures public health, as well as protects the small business owner from over aggressive enforcement."