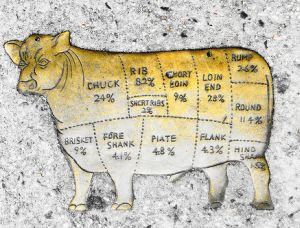 The California based Westland/Hallmark Meat Company is recalling all its raw and frozen beef products distributed since Feb. 1, 2006 – a total of 143 million pounds of ground beef. The largest beef recall in history was announced after an undercover Humane Society video showed workers kicking sick cows, jabbing them in the eyes and using forklifts to force them to walk to slaughter. (See the video here.)

Federal regulations require meat companies to keep downed cattle out of the food supply because they pose a higher risk of contamination from E. coli, salmonella or mad cow disease due to their weak immune systems and frequent wallowing in feces. Department of Agriculture officials have suspended operations at Westland/Hallmark because they did not alert federal veterinarians when its cows became unable to walk; on Friday the San Bernardino D.A. filed animal cruelty charges against two employees fired by the meat company.

Of the 143 million pounds of recalled beef, approximately 37 million went to make hamburgers, chili and tacos for school lunches and other federal nutrition programs. At this point, officials believe the majority of the beef has “probably been consumed”, though the Department of Agriculture said in a statement that it is “extremely unlikely that these animals were at risk for BSE because of the multiple safeguards.” BSE stands for bovine spongiform encephalopathy – mad cow disease. According to the Times, there have been three confirmed cases of infected cattle in this country since 2003.

New York State officials have determined that none of the Westland/Hallmark beef made it to New York City schools via the National School Lunch Program, but 150 school districts around the nation have temporarily stopped using ground beef. (Westland/Hallmark is the #2 supplier of ground beef to the program.) Two fast-tood chains, Jack-In-the-Box and In-N-Out, have announced they won’t use beef from the company.